Someone at the Tokyo Dome event this past weekend was able to get an audio recorder into the event and got recordings of both the OP and ED songs. The opening is very clearly a Psychic Lover song, so if you enjoyed Boukenger, you are no doubt going to find something to like here. Also, does anyone else get a strong "Come On and Dance" by the Steve Miller Band vibe at the beginning of VAMOLA! Kyoryuger?


Something about the ending song, Minna Atsumare! reminds me a lot of the beginning to Mony Mony by Billy Idol, but the rest of it is original and fantastic.


I have to say, I'm really enjoying the music for the show this year. I have a good feeling about this year's series. But not everyone is convinced. Some people on 2ch commented that the opener sounds too much like an anime song, and another complained, "Psychic Lover again?" -- are people really tired of it, or is it just cool to hate things on the Internet?

By the way, the phrase "vamo lá" means "Let's go!" in Brazilian Portuguese. Brazil allegedly has the largest Japanese descended population outside of Japan itself, so many have wondered if the South American and Brazilian influences are a way for Bandai and Toei to reach out to the Brazilian market. Historically, Brazil has received a number of Super Sentai and Kamen Rider series even in the 80s before Saban turned Super Sentai into the Power Rangers. Changeman and Flashman were incredibly popular there, as was Kamen Rider Black.

One poster on 4chan wrote, "I'm Brazillian, and you guys can not imagine my happiness when hearing "vamo lá" in Brazilian Portuguese on a Sentai opening theme."

Here's hoping for a great year!
Posted by Sailor Otaku at 10:19 PM 2 comments:

Gundam: The Origin anime coming in 2014? 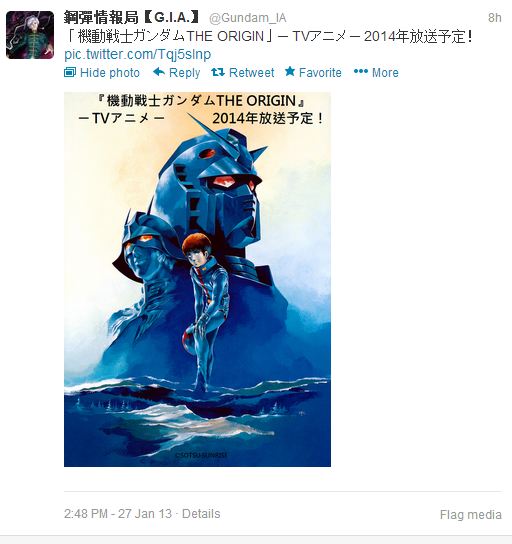 So apparently this is a thing. Japanese blog Gundam Intelligence Agency has tweeted that an anime based upon the Gundam: The Origin book is due in 2014. This is the only information we have on it currently, that it's planned -- maybe. Because this is a blog reporting this, you should, as always, take this with a grain of salt, though Gundam Intelligence Agency isn't known for trolling fans. No idea whether Furuya Tohru will return to voice Amuro once again (though one would expect that the answer would be "yes").
Posted by Sailor Otaku at 10:48 AM 2 comments:

By now, most of us have seen the promos for Kyoryuger. Many people have taken to translating it as "Electrobeast Sentai Kyoryuger". I personally favor the much more clever "DynaSaur Sentai Kyoryuger" and if you're subtitling and you decide to use that, I have nothing but respect for you.

One of the things that's stood out is the fact that the characters are no longer content to just dance over the end credits -- now they're going to dance as a major part of the plot during their transformation sequence. If you ever looked at West Side Story and thought that it would work better as a Super Sentai plot, this is your chance.


The real reason I'm making this post, however, is because a fairly good segment of the theme song "VAMOLA! Kyoryuger" has surfaced online long before the actual release of the show.

If you like your Super Sentai to be grimdark and super serious, this particular series may not live up to your expectations. They've already promised that this is going to be lighthearted and comedic and make judicious use of cheerful music and fun characters. Comparisons to CarRanger have been thrown around. What do you think? Does this disappoint you at all?
Posted by Sailor Otaku at 9:27 PM No comments:

The recent Super Hero Fest event in Tokyo featured a surprise guest. It seems that a mysterious someone ordered a delivery to a very specific location. Grumbling and griping about how boring his life has become, Nobuo Akagi, the former Akiba Red, took the stage in front of an entire auditorium of screaming fans. 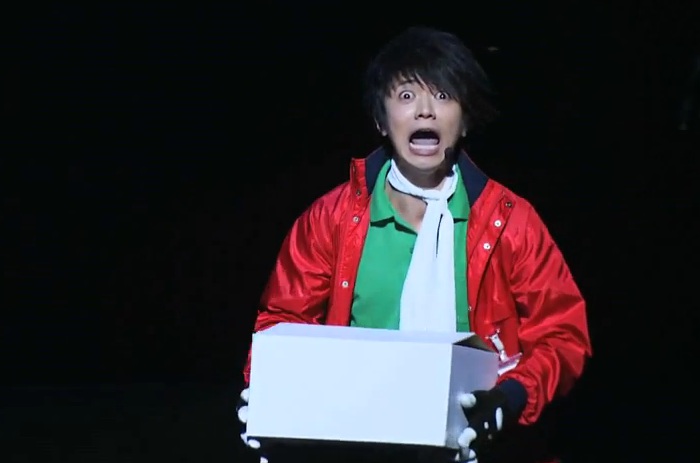 Akagi went on to explain that Malshina was going to give us enough of a fight to last another six months at least, but unfortunately Hatte Saburo, the executive producer of every Super Sentai show, put a stop to that.

"How am I supposed to become a hero like this?! And then as soon as we couldn't transform anymore, Mitsuki and Yumeria just took off!"

Suddenly, the sound of the MMZ-01 communicator came out of the box he was supposed to deliver! 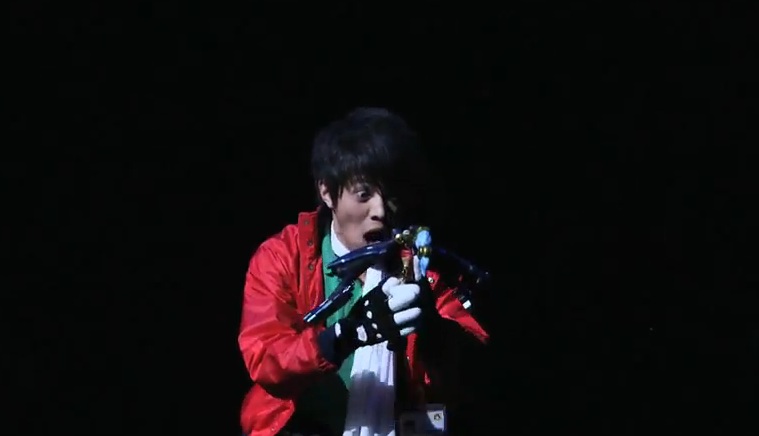 He turns to the audience, sobbing: "Hatte Saburo said... Akibaranger... IS BACK!" 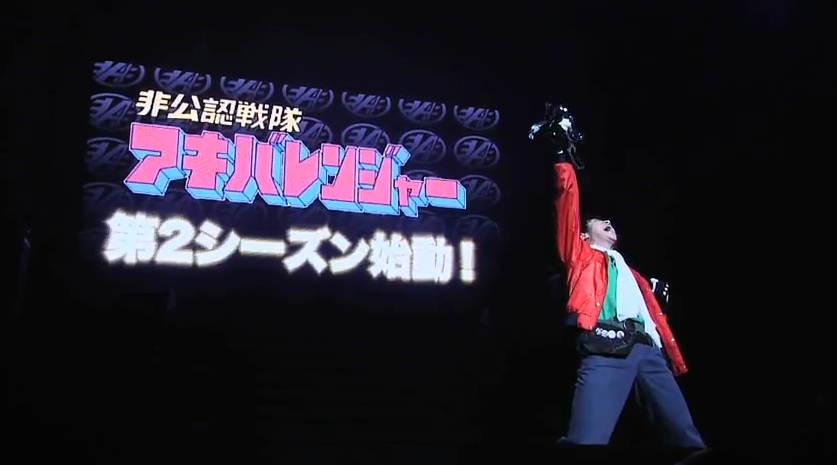 Akagi then wound into his transformation pose, but stopped just short of shouting, "GRAND DELU--- hang on, wait wait wait. Good kids of the audience, I am about to transform into a HERO. Therefore, because this is not reality and just a delusion, good kids shouldn't watch. So, adults... please cover the good kids' eyes for me." 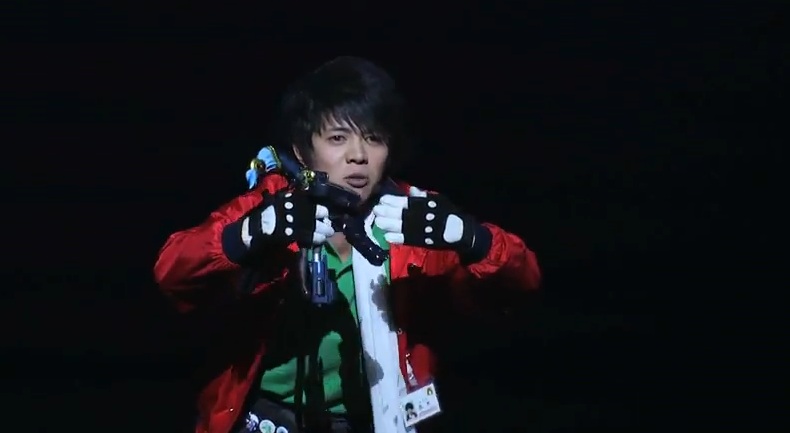 "Okay, here we go... here we go. Hey! That mom over there, cover that kid's eyes! You don't want your kid to become like these adults out here!" 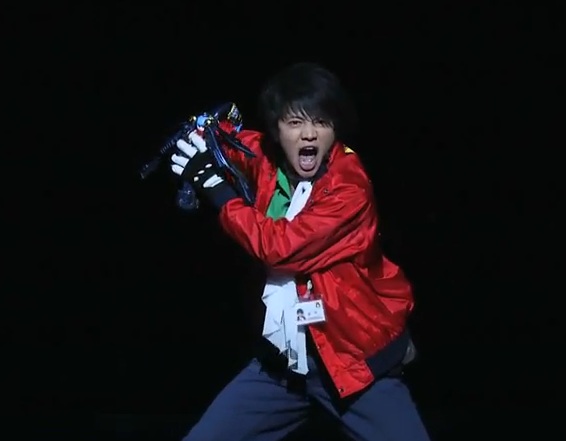 "ZUKYUUUUUN!"
Suddenly, the lights went down, and the transformation tune played. When the lights came back up, Akiba Red was standing next to Akagi, and Akagi ran off! 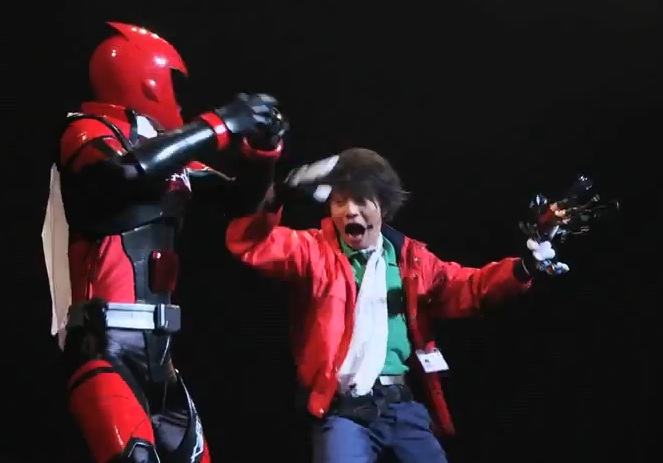 "Okay, let's do this... if it's dinosaurs we're talking about, I'd be Abare Blue... and I'd want Ptera. Like, when Ptera gets hungry, she's like GABURINCHO!" -- he's making a reference to both Abaranger and the new Kyoryuger here. 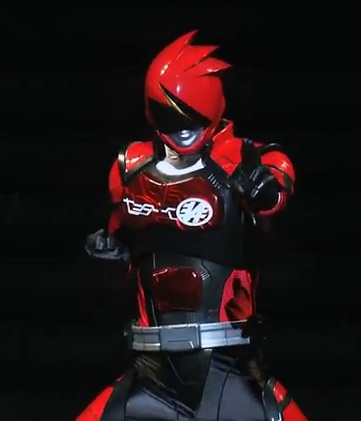 Unfortunately, the audience isn't getting fired up enough, and Akagi coughs, so he calls for a do-over. The second time, he manages to get the audience to fill in the "... power!" part with him.

He begins to do the pose, but stops short of finishing.

"I can't do this by myself! Solo is not sentai at all! I'm going to need to get some new members." 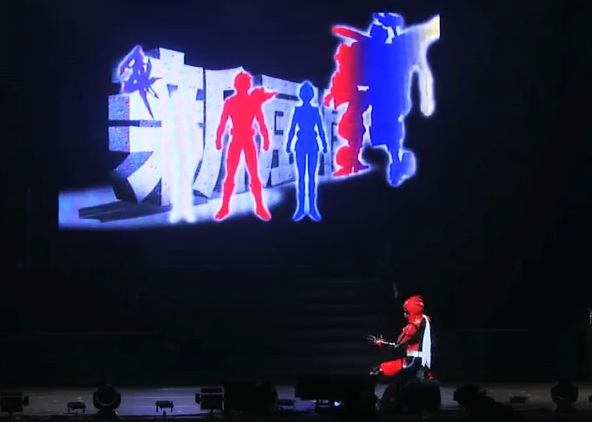 Each one of their names has a color kanji in it. Midorikawa is green, Momoi is pink, Kaneda is gold, and Shirakura is white. Tasaki is mentioned, since he's the show's director, but Akagi says his name won't work -- it doesn't have a color kanji in it.

(This is intended as a joke, by the way, and a shout out to the crew, not as any indication of who's going to be in the show.)

Here's the video if you want to watch it yourself. 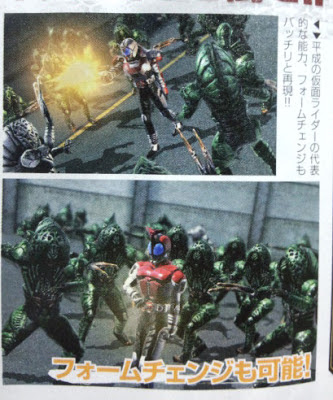 While not a collaboration between Koei and Bandai, Kamen Rider Battle Ride War promises to have expansive battlefields and exciting, realistic graphics, as well as a large number of selectable riders, each with their own special forms and powers. Not only this, but you can summon and ride each Rider's motorcycle and do battle with hordes of enemy mooks while mounted up! An upgrade system will ensure that the characters grow in power over time.

Wizard, Kabuto, W, Den-O, Kuuga, Agito, OOO and Fourze have all been confirmed, and pre-2000 Riders are rumored to be unlockables or DLC.

Currently, the game is a PS3 exclusive, and naturally, there's no plans to bring it overseas. But if you're into importing, it can be yours for the MSRP of 7,480 yen!
Posted by Sailor Otaku at 9:19 AM No comments:

Hey, fans of Akibaranger. Do you wish that like Akagi Nobuo, you too could hang out in a Super Sentai themed restaurant in Akihabara? Well, wish no further, because for a limited time, you too can hang out at the Delusion Cafe! It's not the Secret Base Cafe... it's a little different! 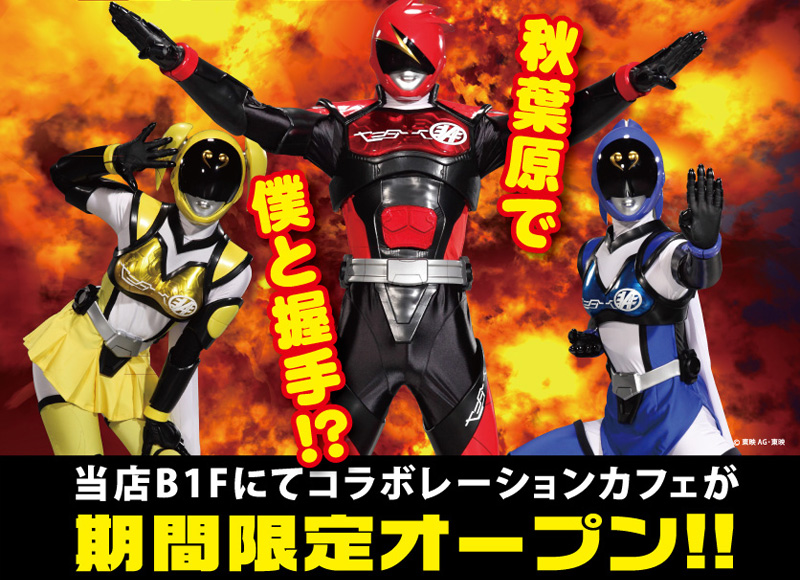 Sponsored by Pasela Resorts, the same company that operates the Kamen Rider: The Diner cafe that I posted about, this themed restaurant at the Bar Rhythm in Akiba promises to offer not only dishes and drinks based upon both Akibaranger and the official Super Sentai, but if the Kamen Rider restaurant is any indication, expect special goods and memorabilia as well. 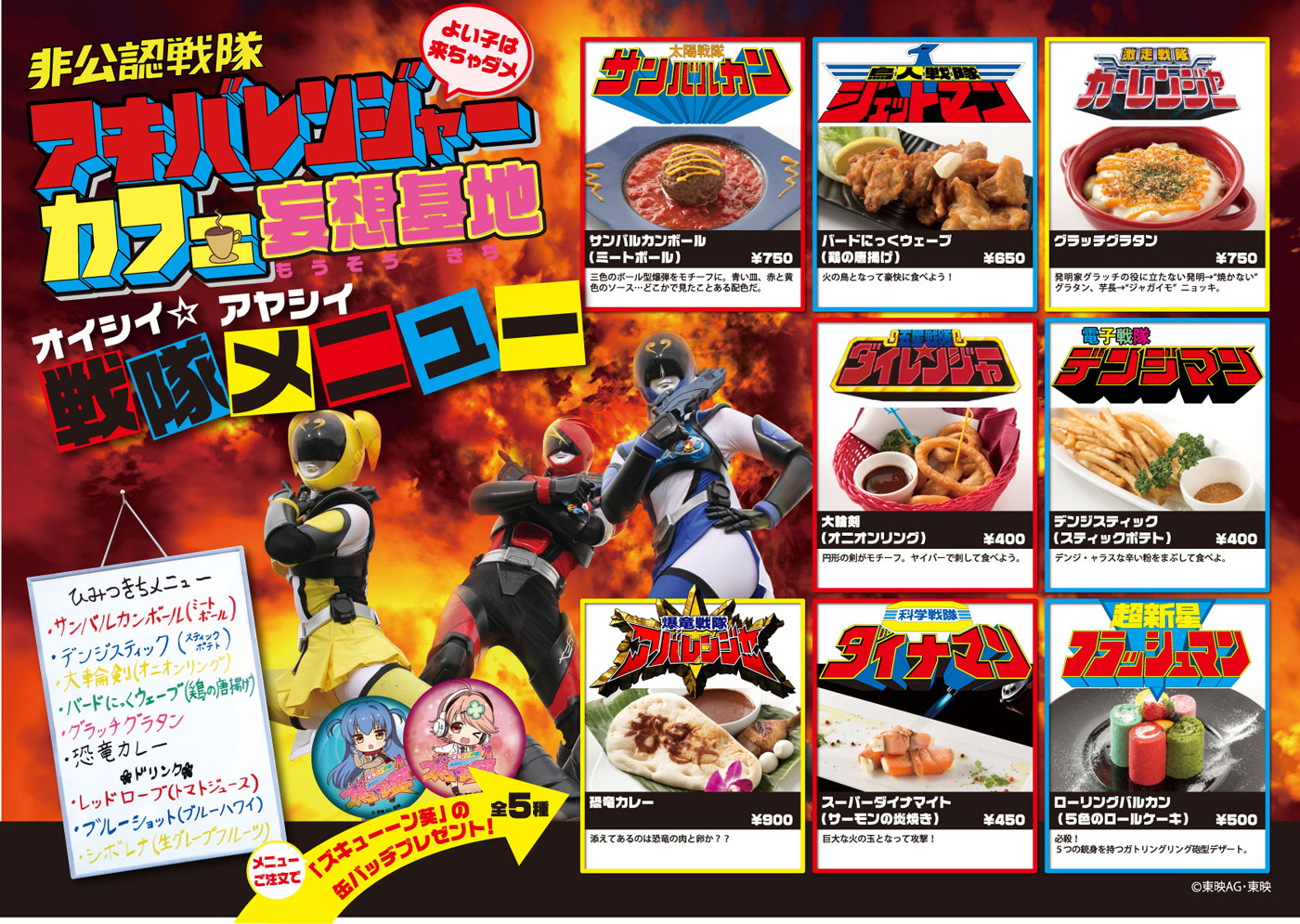 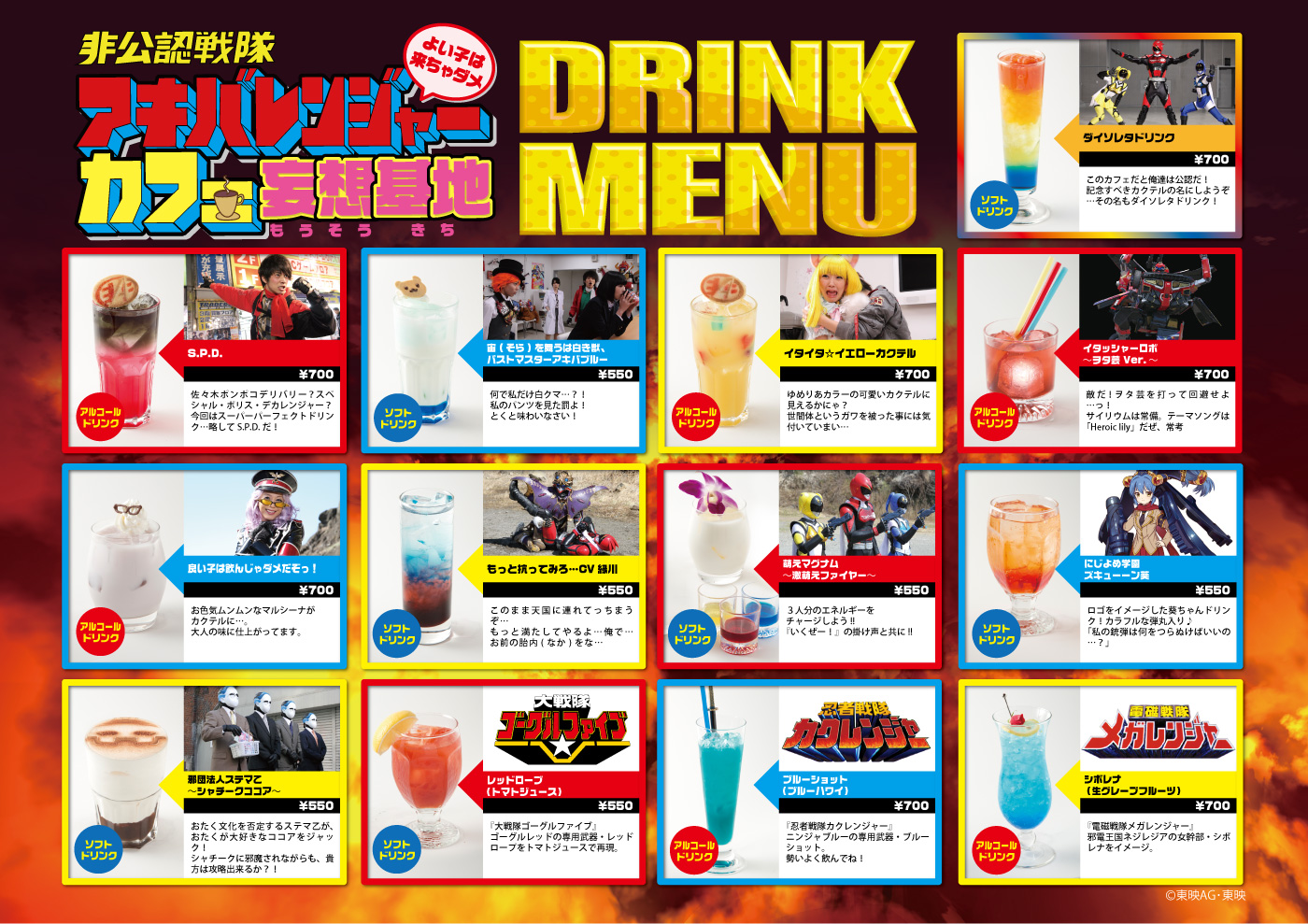 The menu includes dishes devoted to several Super Sentai series, such as Jetman themed fried chicken wings and Dairanger themed onion rings, as well as drinks (both alcoholic and non alcoholic) based upon our heroes from Akibaranger, and several other Super Sentai. Every order comes with a limited edition exclusive Rainbow Bride (also read as 2D Waifu) Academy Z-Cune Aoi.

Some of the highlight drinks include S.P.D, an Akagi themed drink which, in this case, stands for Super Perfect Drink, an alcoholic Malshina themed drink, a Kabuki-cho themed drink called, "Resist me a little more..." (to fuel Akiba Yellow's fujoshi fantasies...) and an incredibly clever Moe Magnum themed drink, which includes a white drink topped with a hollyhock flower (hollyhock is "Aoi" in Japanese, as in Aoi-tan), which you load with three literal shots in red, blue, and yellow (though it's non-alcoholic). The description text reminds to you make sure you say "Here it comes!" (Ikuze!)  before downing it!

Here's the kicker... the restaurant will only be open from today (1/16/2013) to February 17, so if you're going to go, go quickly. With every order, you get one of five exclusive Aoi-tan or Satomi items, so like the song says, you can put it on your bag and flail around in otaku shame!
Posted by Sailor Otaku at 5:26 PM No comments:

Today on Tamashii Nations' official site, Akibaranger Season 2 was officially confirmed! "Hey!" "So, Unofficial Sentai Akibaranger... the second season is finally confirmed!" "This is not a delusion, this is reality!" 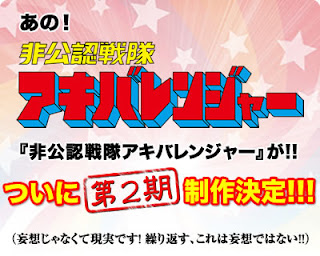 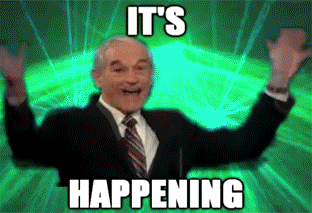 So, what sentai mainstays could we expect to see in the new series? The beach or hot spring episode? The body swap episode? The obligatory wedding interview episode? The time travel episode using the Edo set from the Toei Movie Village Kyoto? Will Akiba Red turn 30 and become a wizard? 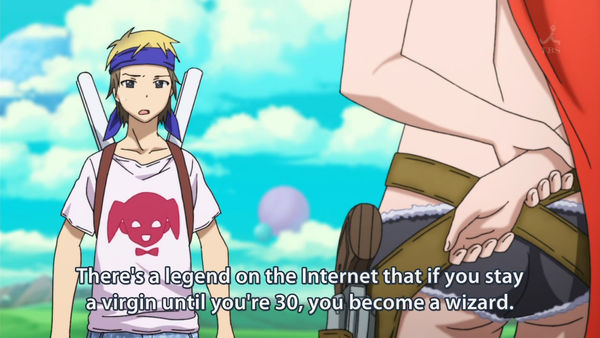 Most importantly... will Hatte Saburo retcon the show so that everything our heroes accomplished will be undone? And... will we see an Akiba Green and Akiba Black?

Toei, Tamashii Nations, Bandai... I'll be in Tokyo in March. Hire me as Akiba White! It's trendy to have a foreigner on your show!

Posted by Sailor Otaku at 7:51 AM No comments:


Posted by Sailor Otaku at 1:24 PM No comments: