I have returned from Japan... it was a fantastic trip, by the way. By no action of my own, I was upgraded to first class on the flight over, and if you've never flown first class internationally, let me tell you that it's like being a Greek deity for 14 hours (except for all the treachery, incest, and tragedy).

While I was there, I had the opportunity to have a look at some magazines for upcoming Super Sentai and Kamen Rider events, but once again, 2ch beat me to the punch with these images of the actual Kyoryu Gold. This time, it's not a troll post news release of Torin. Kyoryu Gold is, like KyoryuCyan, another Spirit Warrior, this time from ancient Japan. From Japan's Sengoku Jidai comes Utsusemimaru. If you're curious what his name means, it's an ancient name from when people didn't have last names: it refers to both the realm of the living, and the cast off shell of a cicada (it's a very poetic word). Expect him to have a cute nickname. 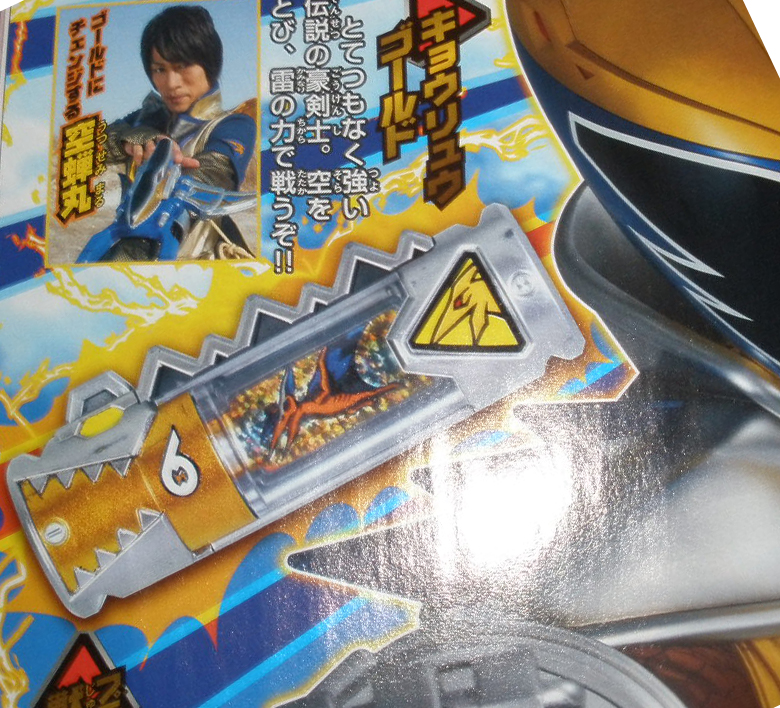 With the power of Pteragodon, Utsusemimaru wields the power of lightning. Some have noted that he's coming in very early (we first saw the beast battery in the hands of the Deboss in the most recent episode) rather than halfway through.

By the way, I'm preparing a number of photos I took while I was there and hope to show them off soon.

Posted by Sailor Otaku at 12:40 PM No comments:

Did you know that most of the places show in Unofficial Sentai Akibaranger actually exist? It's true! Most of the places shown in "the real world" in Akibaranger are real locations in and around Akihabara (delusion sequences typically take place in other locations). When I was there in November, I happened to take some photos of these locations, and I hope you enjoy them. Feel free to ask any questions, and I'll be back there next week, so more will be forthcoming! 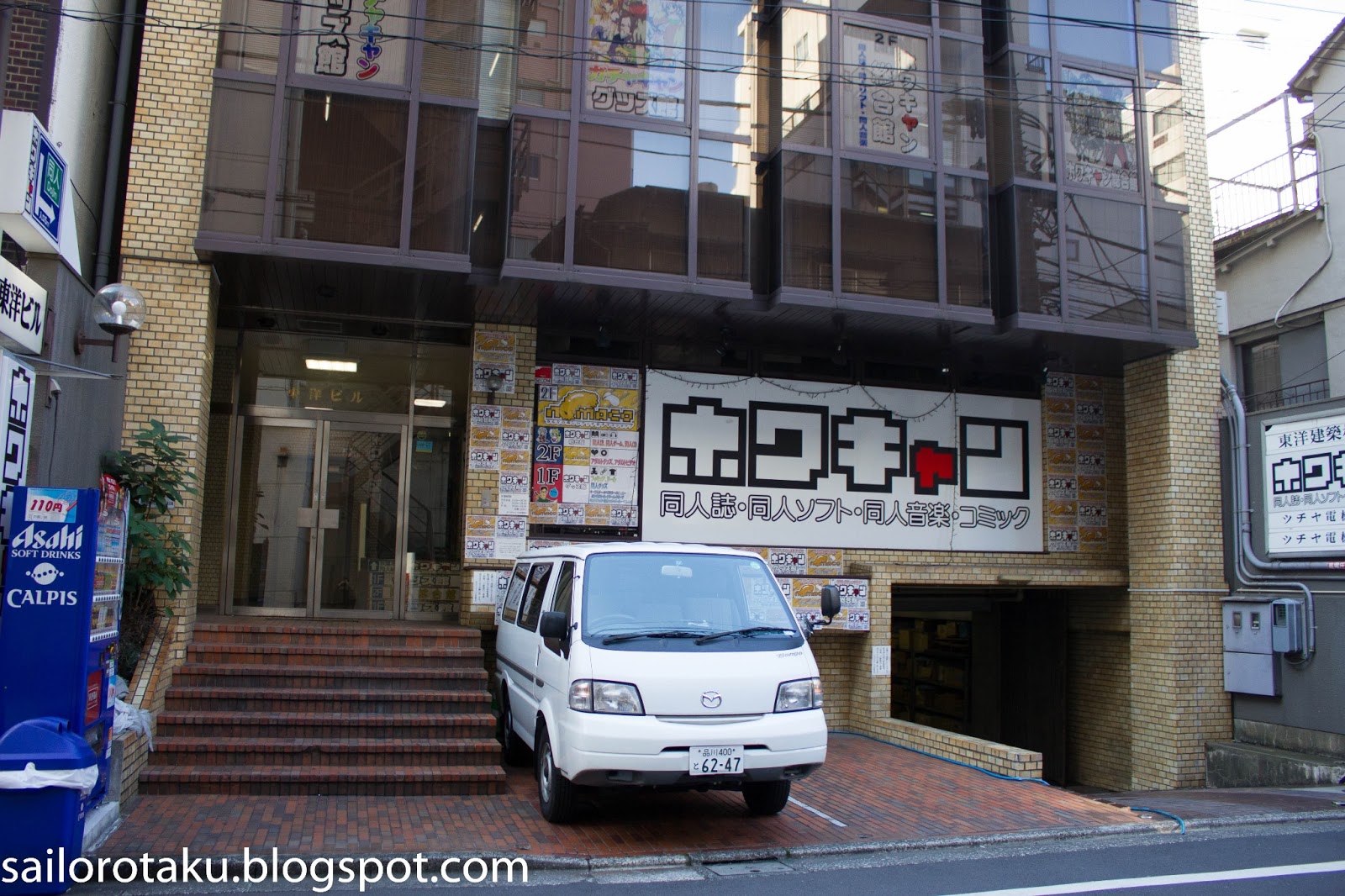 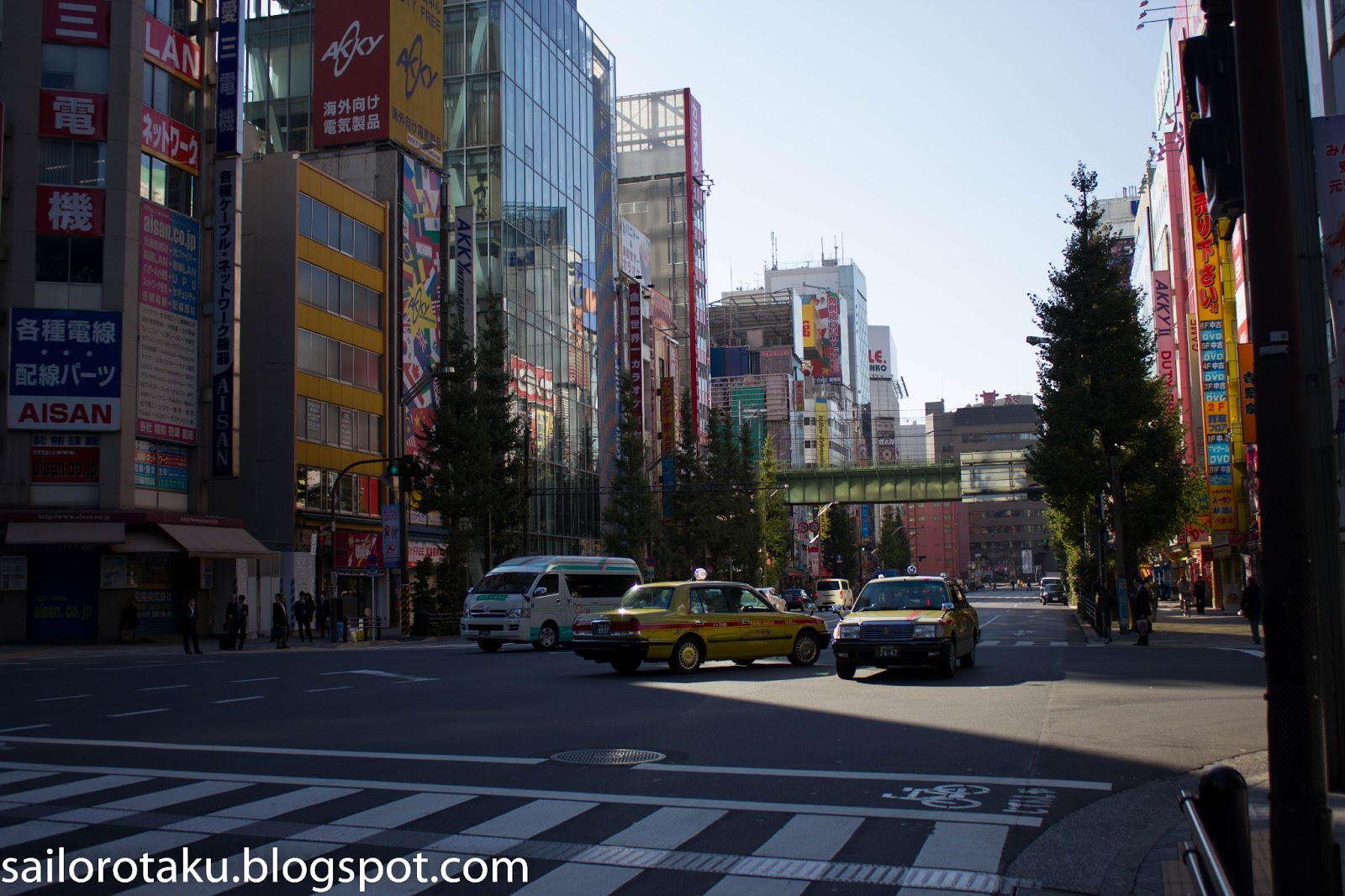 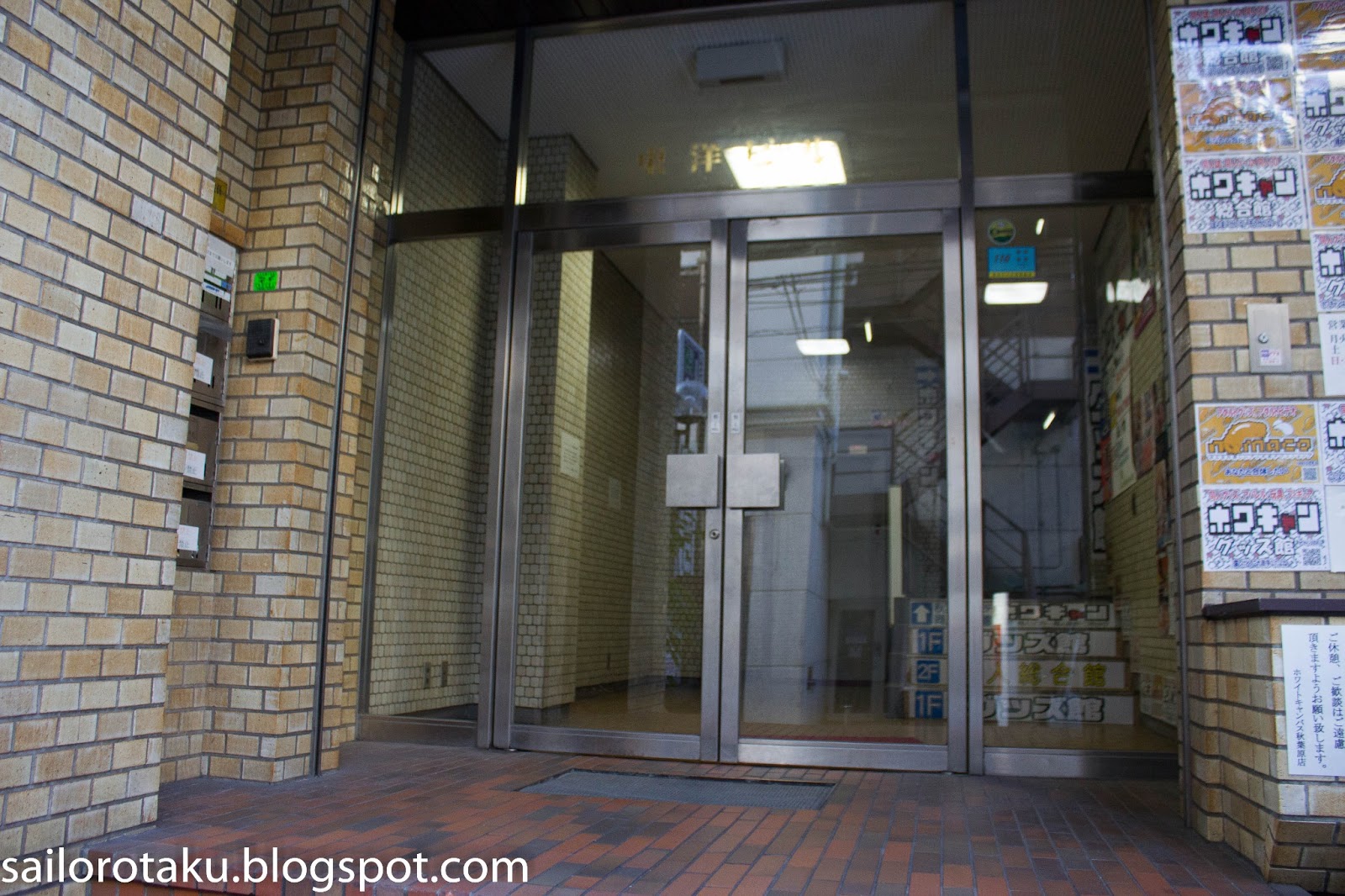 More to come another time!
Posted by Sailor Otaku at 8:00 AM No comments: 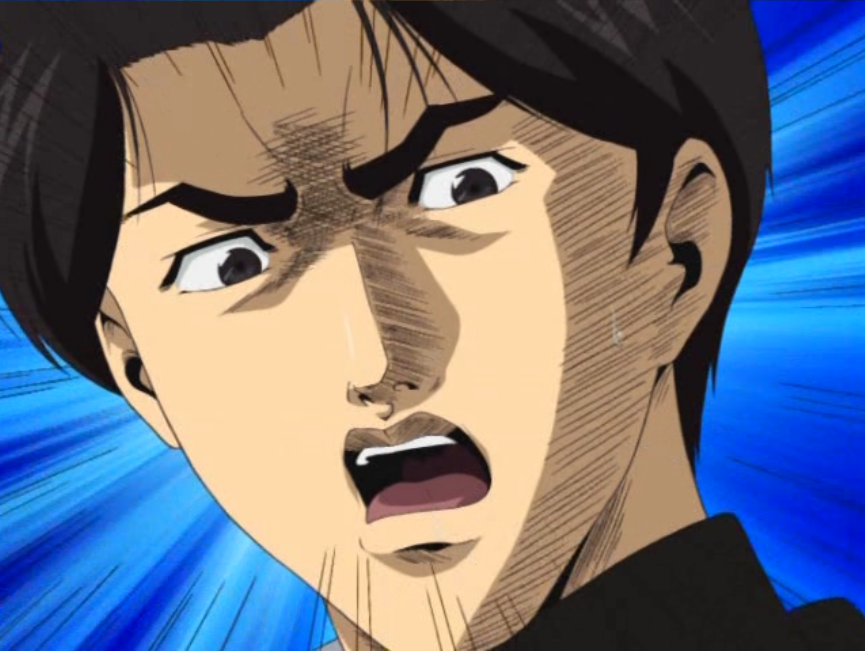 Sailor Otaku is going to Japan?! HOW CAN THIS BE?

No, seriously, I will be in Japan for two weeks beginning March 11th, visiting friends and of course, looking for information, news, and photos of relevance to weeaboos everywhere. Of particular interest this time, I intend to get some photos of famous tokusatsu filming locations, as well as hopefully find some new merchandise. Before I go, I hope to post some photos of real life Akibaranger filming locations that I photographed while there in November.

If you have any special requests, please don't hesitate to post them.
Posted by Sailor Otaku at 9:29 AM No comments:

Scans hit the Internet today of the new villains in Akibaranger Season 2. Horikawa Ryo is not just voicing a character this time, he's actually acting as one named Shogun Tsuu. The military rank he's given is rather different than that of a normal military general -- he's definitely a shogun! 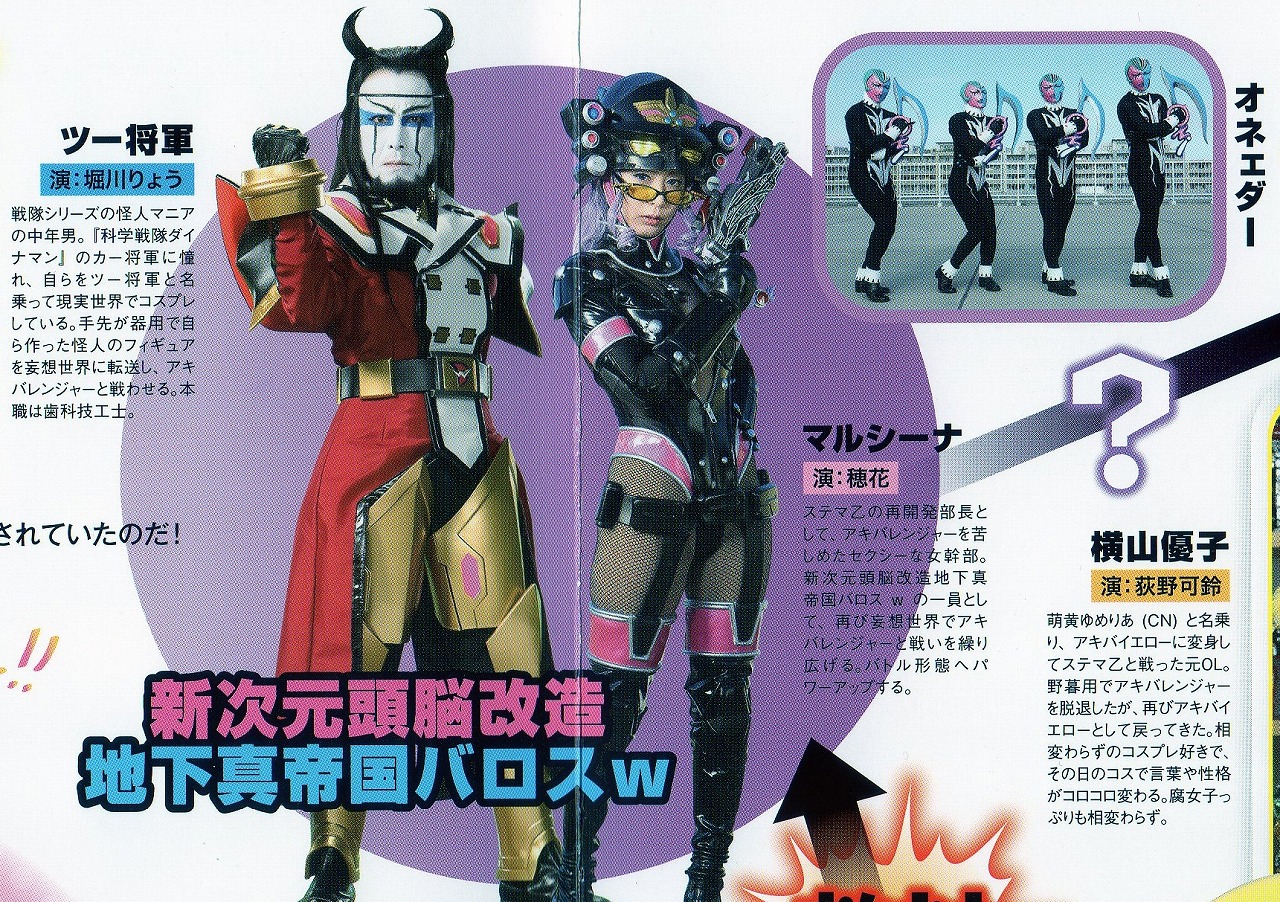 Fans of Super Sentai will no doubt notice that Shogun Tsuu bears a strong, intentional resemblance to another villain from the series history, Shogun Kar from Kagaku Sentai Dynaman (or Mel Fujitsu in the classic USA parody dub). It seems that Shogun Tsuu is, like Akagi, a Sentai fanboy, but more fascinated with the villains than the heroes -- he has chosen the path of evil rather than the path of good!

Shogun Tsuu is a member of the "New Dimensional Brain Remodeling Underground Empire of Baros lol". If that sounds like an awkward mouthful, it's because it's a mishmash of parts of the villain organizations from (in order) Bioman, Jetman, Liveman, Flashman, and Dynaman.


The word "barosu" comes directly from 2ch Internet slang: from 笑、"warau" or "w" or "warosu" or "warota" or even "barosu". It's frequently seen written exactly as shown in the name: "バロスｗ". It's quite similar to how in the West, Internet users have situational variants for lol such as lolz, lulz, lawl, lollerz, and so on, (whether they're meant sarcastically or not).

If you remember Dynaman, even the parody dub, you'll no doubt remember that Shogun Kar was a mid boss, a flunkie to the true Emperor, so it's quite possible that he isn't even the true leader.

One of the most interesting plot points is the number of apparent continuity errors in the storyline, which may actually be intentional. The series supposedly takes place nine months after the original series, but it appears Akagi has just turned 33, which contradicts him being 29 in the previous series (though it's been pointed out that the statement was made by Masato Wada himself, who turned 33 in real life -- Akagi may still get his Wizard upgrade). Yumeria's name is listed as Yokoyama Yuko rather than Yamada Yuko. Most interestingly, the original Akiba Blue is nowhere to be found, replaced by another character with an identical kanji for her name, but read as Luna rather than Mitsuki (one might recall "Bishoujo Kamen Luna Sailor" as one of the competing titles from the production company that Dr. Z used to work for in Season One).

The story goes that one day, Akagi discovers that Akibaranger merchandise is being sold in a toy shop in Akihabara. Something strange is going on... could Hatte Saburo be behind this again? Or is it something even more dire going on? Could the Akibaranger have been co-opted by an outside force that is ruining the continuity?

Update: Yahoo Japan posted an article that states that the new series takes place in a world parallel to the one from Season One... or does it? Are there boundaries between worlds in the domain of delusion?
Posted by Sailor Otaku at 7:27 AM No comments: