Saw this on both Japanese sites and 4chan today. Allegedly it's a picture stealthily taken of Kamen Rider Gaimu... from the back. This confirms my earlier suspicion that he's samurai based. 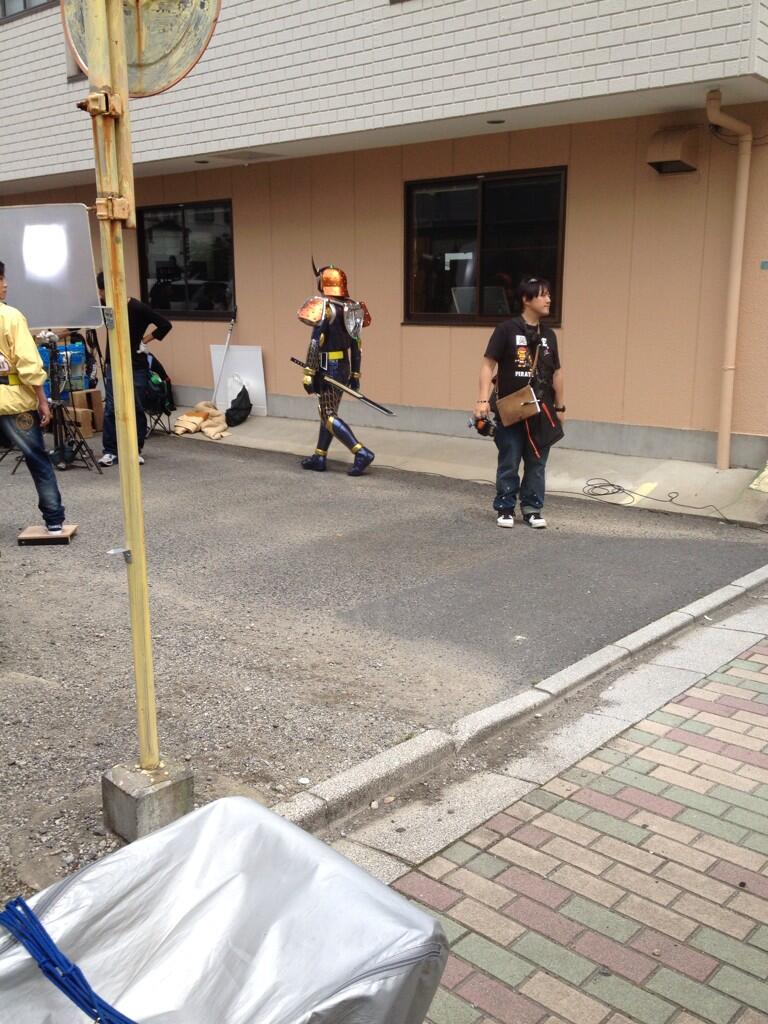 Note the person standing on the board in front of the light diffuser on the left wearing the yellow shirt. He is wearing the same belt as the samurai on the right. This means that most likely, they are filming a transformation scene, and the Rider actor is about to step in to replace him. The platform he is standing on is typically used as placemarkers so the hero doesn't step too far out of the shot. I have to admit, I do rather like the bronze, gold, and blue color scheme.
Posted by Sailor Otaku at 11:18 PM No comments:

Speculation was running high that Pleseon was going to have a hero associated with him, and that turned out to be true. If you're curious why the Gaburevolvers all have Shigeru Chiba's voice, and why the Spirit Warriors don't use the Gaburevolvers to transform, there's an in-universe explanation. Shigeru Chiba will be playing Dr. Ulshade, a genius scientist and a retired Kyoryuger, Kyoryu Violet, who just happens to be the one who developed the Gaburevolvers (and in fact, numerous weapons based upon the Beast Batteries). With upcoming upgrades for Kyoryu Red and possibly the others, could Dr. Ulshade be the one who'll develop them? The answer is, yes, probably. 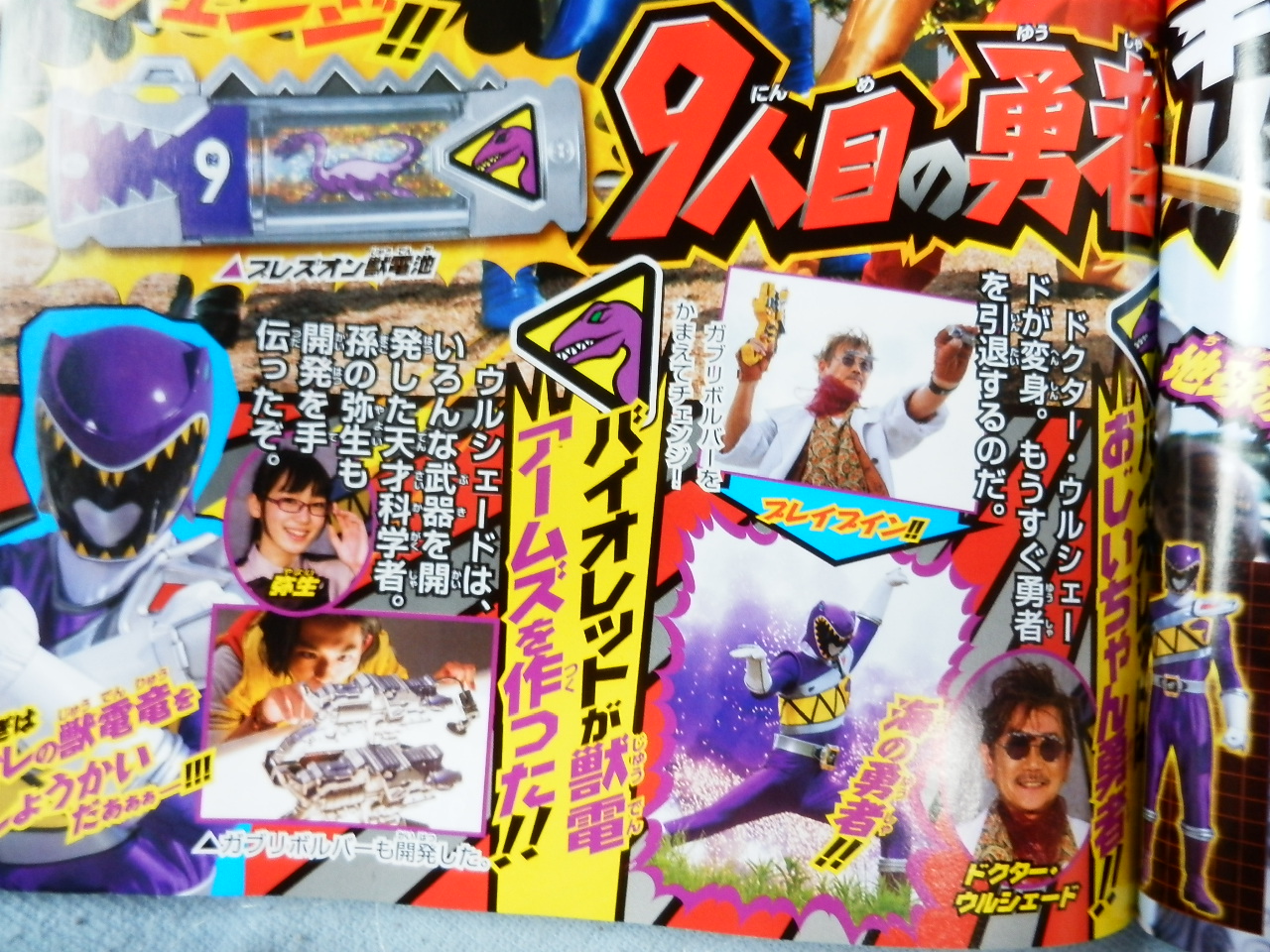 Posted by Sailor Otaku at 8:11 AM No comments:

Previously, I'd mentioned that actor Asao Kobayashi, actor for Vul Panther in beloved 1980s series Taiyou Sentai Sun Vulcan (and son of famous composer Asei Kobayashi) had been arrested in Aomori Prefecture for lewd and lascivious acts with a minor that he had met on the Internet via a social networking site. Things just keep getting worse for him, it seems.


It's always disappointing when people who used to be idolized by children commit crimes. It shines a negative light on their performance in their original series. Some have speculated that this could lead to Toei promoting Sun Vulcan less due to Kobayashi's actions.

Thanks to the posters on 4chan for making the event less depressing with images.

Posted by Sailor Otaku at 12:45 AM No comments:

The painted version of the Sailor Mercury figure has been completed and hit Tamashii Web's page. 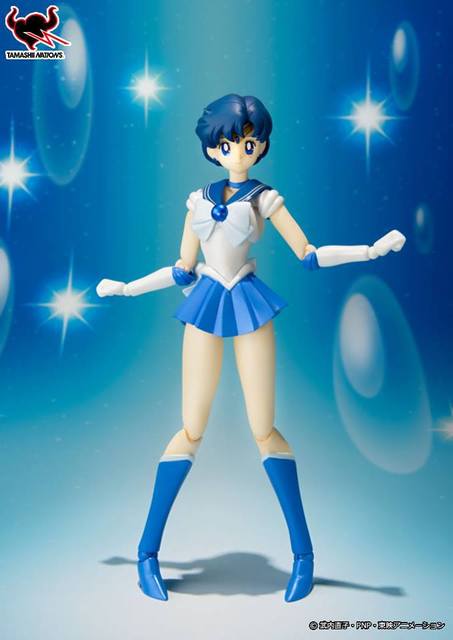 Like Sailor Moon's, expect a number of accessories including her VR Visor. No word on whether Mars, Jupiter, and Venus are planned. Mercury is, without a doubt, the most popular of the original five, but allegedly people have seen an unfinished version of Saturn (S version, not Stars).
Posted by Sailor Otaku at 1:12 PM No comments:

Not fake at all: Kamen Rider Gaimu is the next Rider.

Yesterday I reported that the next Rider appeared to be named Kamen Rider Gaimu, but it was potentially a troll post on 2ch. I'm here to report this morning that it was a legitimate leak. Speculation is running high that the next Rider will be samurai and Japanese mythology themed. A reputable poster on 2ch mentioned that this year's theme has "only been done once before in Kamen Rider", leading people to speculate that he's referring to Kamen Rider Hibiki.

Further fueling the speculation is the fact that the word GAIMU and the associated kanji, 鎧武, are typically used when describing sets of ceremonial samurai armor -- it comes from the word "yoroimusha", armored warrior（鎧武者）which is typically associated with samurai. For those who believe that a numerical pattern has been followed since Decade, the number six can be written with an kun-yomi reading of MU.

Lastly, there were dismissed-at-the-time reports last month of a character on the upcoming Kamen Rider Wizard movie set that was wearing a samurai style topknot and had a family crest on his belt, and was wielding two swords. There have also been rumors on 2ch that the next Rider would have a horse instead of a motorcycle, or the horse WAS a motorcycle, or something like that. An armored horse mounted samurai would not be out of line at all, and the helmet style of a typical samurai is very similar to the style of  a Rider. 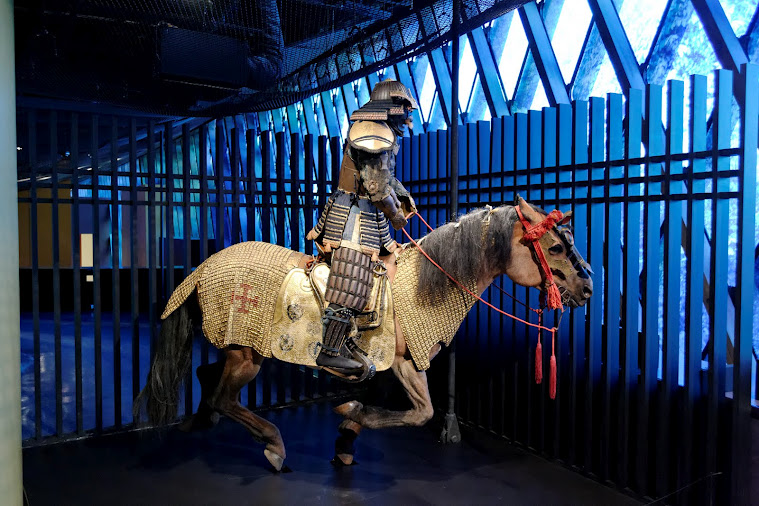 So, speculation is running high as to what the next Rider's gimmick could be -- whether it's different swords, magic arrows (since horse mounted archery was a big thing), or something similar. Will he give Haruto a copy of Miyamoto Musashi's Book of Five Rings when he meets him in the movie? Are you excited about SAMURIDER?
Posted by Sailor Otaku at 6:20 AM No comments:

[Possibly Fake] The Next Kamen Rider is...

Someone on 2ch posted this, claiming to have seen the copyright registration for the new Kamen Rider series (the one following wizard). The photo here is the alleged screencap. 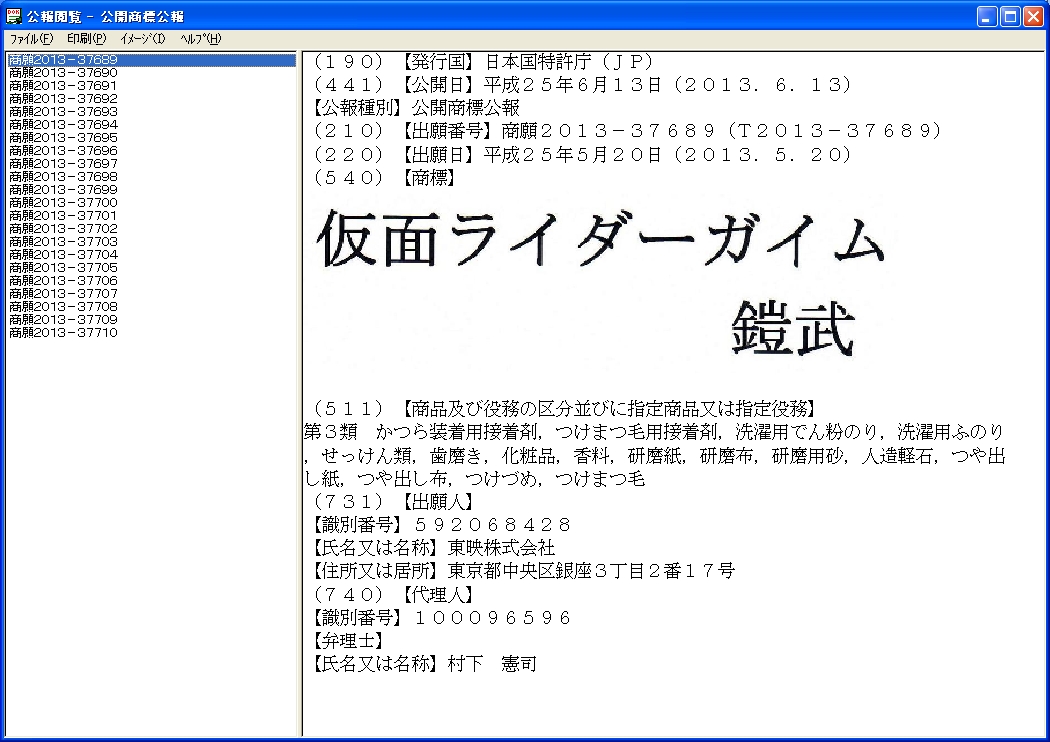 The name in the registration is Kamen Rider GAIMU. The kanji beneath GAIMU are written as well. GAI meaning "armor equipped" and "MU" meaning "chivalrous warrior". This says literally nothing about the show and its gimmicks, as technically speaking, every Kamen Rider is an armored chivalrous warrior.

We should have the official information in a few hours, since today is the day that the copyright information for the show officially hits. Is Kamen Rider Gaimu the next Rider? Or is this a clever troll post by a Japanese prankster? We'll know shortly!
Posted by Sailor Otaku at 3:33 PM No comments:

According to the TBS Daily News, actor Asao Kobayashi, famous for playing Asao Hyou aka Vul Panther in the 1981 series Taiyou Sentai Sun Vulcan, has been arrested in Aomori Prefecture and charged with sex crimes against a minor. According to the news report, it appears that he arranged to meet a high school girl via an Internet site and sexually assaulted her in an apartment, after which she went to the police.

He is the son of Asei Kobayashi, composer for a number of anime series, including beloved magical girl series Sally the Witch.

2ch is in full troll mode, as you might imagine.