I haven't updated this thing in months, and for that, I'm sorry. I haven't forgotten about you all, though.

The first thing I wanted to mention to you is that back in March, I was in Tokyo, as I frequently am, and happened to be invited to be an extra on ToQger. Talk about your dreams coming true. It was filmed at Tokyo Dome City (the episode that introduces Zed the Emperor of Darkness), and among the many things I got to do, I got to ride the roller coaster in the scene you see with the cast. I also appear in a few other places in the episode, but I can talk about that another time.

What I'm here to talk about today is ToQ #6 has been revealed at last in the pages of magazine Terebi Kun.  No, it's not Zed, no matter how fascinated with KIRA★KIRA he seems to be.

That's not him either, that's Regina from DokiDoki Pretty Cure, another series that made it look like a villain would be the next hero, and then trolled everyone when she didn't.

No, the new hero used to be a Shadow member long ago and actually resembled a Wild West desperado, but he had a change of heart after witnessing the beauty of the rainbow. With a missing memory, Right and the others give him the name Nijino Akira. That means "Light of the Rainbow", if you're into the significance of names. 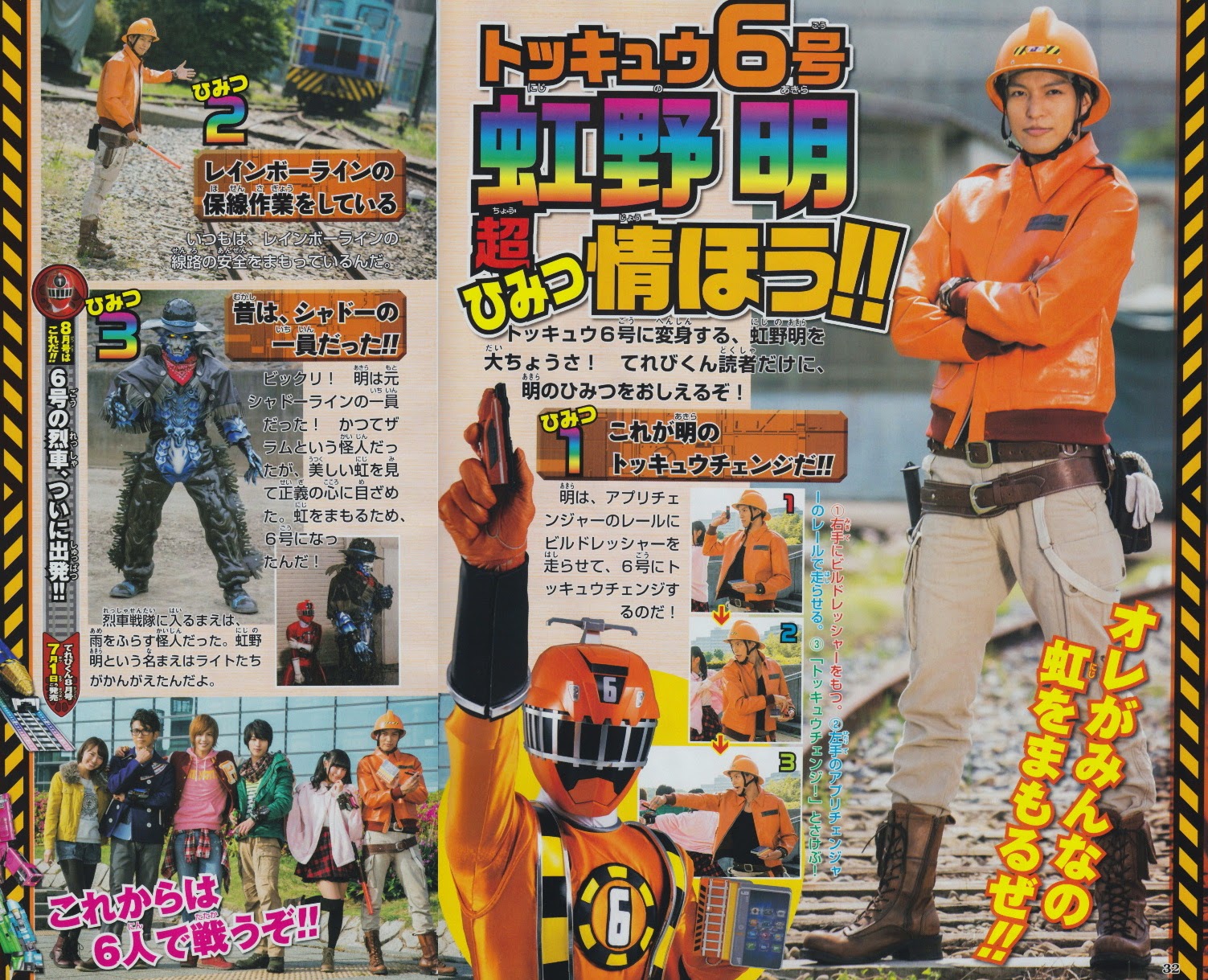 So anyway, he sees the rainbow and apparently decides he likes hanging out with a bunch of undead teenagers more than he likes being a gunfighter monster, and he puts on a tanktop and becomes cheesecake for all the mothers and fujoshi to enjoy.

All kidding aside, part of his character appears to be that he's looking for the place where he died, a sort of grim element that may further explore the earlier discussion about whether Right and the others are actually dead, in a coma as some have theorized, or something else. Like all popular Sixths, his transformation device, the AppChanger (English speakers say apps, Japanese speakers say "appli", differs from the other, resembling a smartphone with a track for inserting the train, which, appropriately enough, is called the Build Express.

I should mention that traditionally, a rainbow is said to have seven colors, and given Zed's appreciation for purple, there's certainly room for a violet themed ToQ #7 somewhere in the future.

Look forward to Akira's debut on June 22nd!
Posted by Sailor Otaku at 9:27 AM No comments: