Called to meet a mysterious informant, Ryoma steps directly into a criminal's plot for revenge. When an explosion goes off literally in his face, he is left without a memory! Convinced by a criminal that Commander Masaki and Winspector murdered his family, Winspector finds themselves facing the unlikeliest of foes... Ryoma himself! Can they save him and restore his memory? Or will Ryoma fulfill the criminal's evil wishes and eliminate Masaki?

Notes:
It's such a simplistic plot: the hero gets amnesia. And yet, the reason they keep doing that plot is because they can do it well. Watch Ryoma's actor really sell it this time, and Masaki be awesome. I am convinced that this is the best acted show out of all of the Metal Heroes series.

Camerawork: there is one shot near the end where they have a high angle shot of the area and do a panover of the building, and you can see Hisako and Junko run across the roof without changing scenes.

A fantastically acted episode with very little suit action, but a lot of drama. Enjoy. Next time is a Walter focus episode! 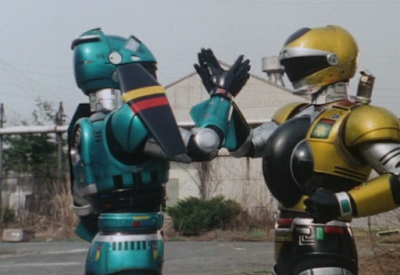 With the new transformable WinSquad, Ryoma tracks down Reaper Moss, trying to stop him from stealing the Japanese Seed Bank Project and rescue Dr. Satomura. But incidents begin to befall the Winspector team. Bikel and Demitasse are ambushed and taken out of commission, and Walter walks right into a trap. When team is attacked during a supposedly secret stakeout, an uncomfortable truth becomes apparent: Reaper Moss has a spy. Get ready for the fight of a lifetime as Winspector prepares to storm Reaper Moss' well defended stronghold!

This is probably one of the most action packed episodes in the entire series, consisting of car chases, new weapons, the all new WinFire transformation, and a long out-of-suit gunfight scene where dudes actually get shot instead of having the guns shot out of their hands. A very satisfying follow-up to the previous episode, certainly designed to encourage children to beg for Winspector toys.

On the spelling of Daytrick: it's an actual company in Japan, based out of high tech city Tsukuba. The gun itself is very reminiscent of Deckard's gun from Blade Runner.

Posted by Sailor Otaku at 9:18 PM No comments:


When a foreign man known by the nickname Reaper Moss plots to steal the Japanese seed bank project in an effort to control the future food stores of mankind, he uses his vast resources and technological prowess to do so. Ryoma squares off against a supercar with abilities that surpass even the WinSquad!

WinSquad is destroyed, and Ryoma hovers on the brink of death. What will become of Special Rescue Police Winspector? Is this really the end?!


Notes on this episode:
This episode fires on all the right cylinders. It has amazing music and stunt choreography... with some hilarious cutaways between the models and the real thing. Yuko is back (yay!). Demitasse is introduced. And the WinFire hits the stage? What's the WinFire, you ask? Oh, you'll see.


Demitasse is one of the more fun characters to write for. He gets to sass everyone. An interesting note about his name: Demitasse is a small half-cup used in serving Turkish coffee, yes... but it was also the name of a popular brand of canned coffee available in coffee vending machines both then and now. The humor is obvious: he looks like a coffee can.

Enjoy this episode, because it sets up for a two-parter! 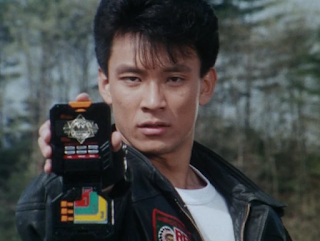 I think it only right to warn all of you that Episode 12 is a Kyoko Sagiyama episode. Who's Kyoko Sagiyama? She's a fairly prolific writer for several tokusatsu shows, and also wrote Magical Princess Minky Momo. She went on much later to work for Capcom with some other tokusatsu writers, and most notably co-wrote the scenario for Resident Evil 2. Her storylines can go off the deep end a bit -- she works in extremes and occasionally nightmare fuel. I recall that several of her episodes involve killer plants. I know one in Winspector does (later), and that one episode about the killer flowers in Zyuranger? The creepy one with the toothy flowers and Mei and stuff? Yep, that was Kyoko Sagiyama.

This episode is about a friendly robot! It's a robot programmed to be a boy's best friend! What on earth could possibly go wrong?

Did he say murder machine?! What the hell, Sagiyama?

I have only a few notes for this episode, and they are both from the same scene:
This is the first episode where someone actually points out that Bikel has a weird Nagoya accent. Robo describes it as "incomprehensible". Bikel, of course, takes offense.

The second is Walter's attempt at negotiation. He actually uses a phrases that is semi well known or famous from post World War II Showa period police dramas, like late 40s, early 50s era. It's not really used much anymore, and Walter doesn't really use it appropriately. The phrase he uses would be appropriate, for example, if they knew there were a ring of thieves, and they caught one of the thieves. They would negotiate with him saying, "If you tell us where your accomplices are, we'll be more likely to go easy on you."
Bikel notes that the phrase is positively ancient and that Walter must be studying some super old regulation manuals.

I have to admit, I don't dislike this episode. It's actually a pretty good watch, and it's one of the few actual tokusatsu style fight scene episodes in the show, if you like that. Hope you enjoy this one, though, because next time... NEXT TIME... it's goin' down for real.