A rash of daylight home invasion robberies, all with the same M.O. The only witness? A young boy with a former detective father who claims to have seen it all. But now, that boy is in the suspect's crosshairs. What lengths will the boy's father go to in order save his son? And will Ryoma and his team be able to save them? 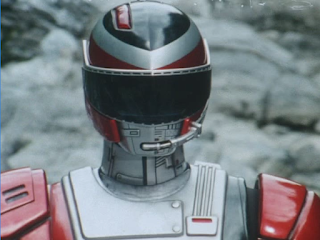 I didn't care for this episode at first, mostly because the focus of this story is not so much on Winspector themselves, but on other people who interact with them. It grew on me in my later viewings.


I think it's because I was assuming everyone to be misjudging the kid for lying, but in actuality, they were spot on: the kid actually is a compulsive liar. Note the scene where he says he sees the criminal's face. He actually doesn't. He sees the shoes, and that point is reiterated a few times.

What brings the plot together is why the kid feels a need to lie, and how he resolves the conflict between him and his father. As a side note, Winspector's version of 1999 Japan is apparently ahorrific crime ridden dystopia where even common burglars have easy access to dynamite.

The writer for this episode is Junichi Miyashita, whom as I have mentioned before, liked to put kids through nightmarish real life terrors, and he definitely does it here. Miyashita episodes have kids as hostages, snakebike victims, fall victims, zombie attacks (in Resident Evil) and far worse. Many tokusatsu writers give kids an easy pass. Miyashita always put kids through hell, but fortunately, always made them stronger for having endured it. Maybe that says a lot about the human situation in general, and it certainly shows here in this episode. Hope I didn't spoil it too much by telling you that the kid doesn't get murdered.

You'll see some more terrifying kid nightmare episodes from Miyashita later on in the series. That's all I'll say about that for now.

The bridge in this episode is Miyama Bridge, found at Mount Takao, which is part of a national park found in Hachioji just outside of Tokyo. It's frequently used in tokusatsu shows even to this day.

By the way, that song that you hear in the final scene on the bridge after the villain is subdued -- that's actually Masaru Yamashita, Ryoma's actor, singing. The song is an insert song called "Kimi ga shiawase nara" meaning "As Long as You are Happy".

A young girl is being used by her father as a part of an experiment to harness psychic powers in human beings. But with no crime taking place, Winspector has no legal right to interfere. Who are her father's financial backers, and what are their intentions? When Nonoyama discovers that she has brain wave abnormalities, Ryoma races against time to try to save her... but does she even want to be saved?

Notes:
First things first, this is a Sagiyama episode. As one of the main writers of Minky Momo, girls with powers and angst are her bread and butter. However, she does it so well. This is actually not a bad episode by any means. We don't get a Suit Up scene. Ryoma gets in the car and drives through an explosion already suited up. There's very little action in this episode, but what they have isn't too bad. This episode also has something very interesting: foreigners. Much like some of my friends who frequently show up in tokusatsu episodes, these guys are our predecessors. Anyone know who they are? Are any of you them? I'd love to hear about your experiences on the show if so.

This image is from one of the drawings in the episode, a neat feature of pre CGI shows. I love that someone actually drew that. 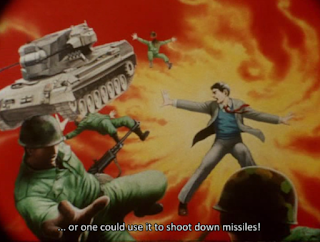 I hope you enjoy it. By the way, Ryota appears very infrequently from here on out. 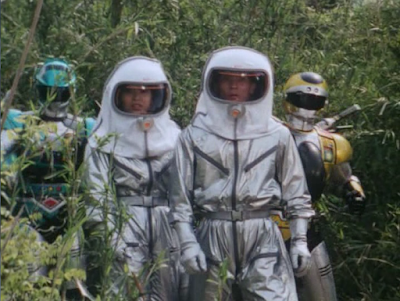 "The Terrifying Gift from Space"
A deep space satellite falls from orbit near a small mountain village being developed into a resort. Winspector is sent to recover the data from the satellite and assess the danger to the surrounding area. What they discover is something truly terrifying. Trapped in a quarantine zone and with no one to help them... will Winspector manage to survive? Or will they too be claimed by the terrifying gift from space?


Notes:
You're either going to love this episode or you're going to hate it. I love it. The science in it is really quite smart. The writing is slick, the set-up is great considering they're using toy slime and Play-Doh as a prop, and the action is intense. Once it starts, it really does not stop. If you ever wanted Winspector to have a zombie episode for some reason, this might make you happy. The musing by Commander Masaki and and ending narration is really nice, one of the best in the series.

Cultural note for your perusal: the scene at the end where Ryoma is still standing after taking a beating... look up the "Standing Death of Benkei". This is referential to a legend that persists in Japanese culture of a defender who was so tough that he refused to fall down even in death. 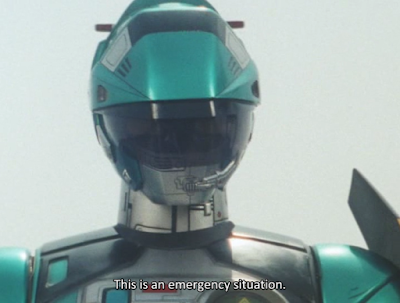 When a lonely little girl who's having trouble making friends accidentally reveals her crush on Walter, Junko asks the Commander to let them meet. But two criminals put a plan to abduct Walter into practice. Cut off from Winspector HQ, and with his self-destruct timer ticking down... will Walter's first friend also be his last?

Finally, a robot focus episode! In this episode, the serious and humorless Walter loosens up a bit, and we see more of his sensitive side. Sensitive for Walter is still serious, but he tries. I hope you didn't cry when Number Five got beaten up in Short Circuit 2 or when robots get tortured because I have bad news for you about this episode. 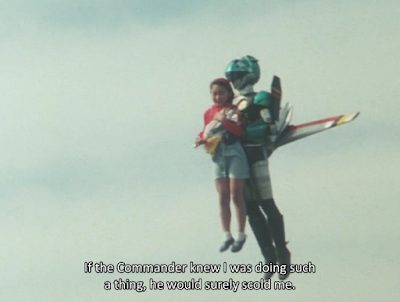 This episode has a rare appearance from the infrequently used Spin Claw device, and the equally rare Secret Medal used by Demitasse.

A cute, feelgood episode that lets you know more about the personality of everyone's favorite green crimefighting robot. Enjoy! 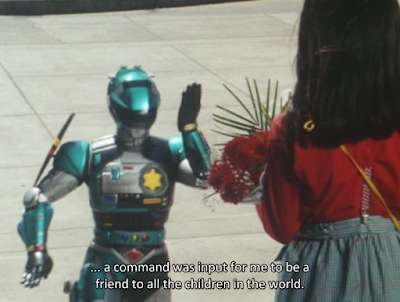