Something mysterious is happening on Mount Tsurugi. A series of attacks, all leading to mysterious puncture wounds on the neck and hospitalization of the victims while they rant and rave deliriously. Even more mysterious are the rumors of the evil hag that haunts the mountain. Ryoma's team investigates... but when Ryota and Inspector Rokkaku fall victim, the investigation becomes personal. Who -- or what -- is behind the secret of the Yokai of Mount Tsurugi?

Notes: Celebrate your Turkey Day by watching this stinking turkey of an episode. I once had a drunken conversation with Tom Constantine where I told him how this episode was literally a Scooby Doo episode with a Wizard of Oz reveal, and it makes no sense.

Oh, and that hideous bird puppet is back, albeit with some modifications. 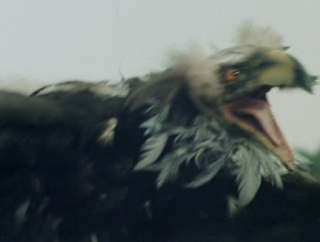 Okay, so he built a robot of a horribly mutated human face bat so that he could mourn the loss of a mutated human faced bat? And what was with the marks on the neck? Where did he make hallucinogenic drugs? And WHY COULD A ROBOT BY HYPNOTIZED? WHAT EVEN IS GOING ON HERE.

My favorite line of the episode: when Bikel delivers his "Makassecho!" line in a monotone. I got to subtitle it as "Hey. Forget about it."


That and, "There was no place in this world for human faced bats or monstrous birds."

And he would have gotten away with it if it weren't for that meddling cop and his support robots!

Susumu Takaku usually wrote creepy stuff. This time, in my opinion, it was a bizarre mess. Happy Thanksgiving to those of you who are celebrating it, though!

Ryoma's sister Yuko meets a kind old couple on a bus and strikes up a friendship, visiting them at their assisted living home on the weekends. But the old man's past as a particle physicist comes back to haunt him... someone is after his old research for unknown purposes. When Yuko gets caught in the crossfire, the residents of the retirement home spring into action as unlikely heroes to save her! But will their greatest adventure also be their last? 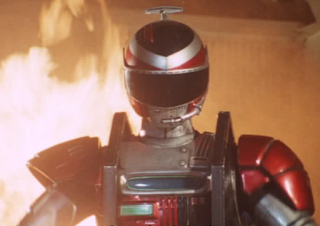 Ryoma's little sister Yuko is back! She's really cute. I wonder what happened to her as an actress? I'm almost afraid to look her up. In any case, this is an episode about an unlikely adventure she has after meeting a group of elderly folks that live in a retirement home. A few notes for you: it's really common for younger people to call elderly people "grandpa" "grandpa" even if they're not their own grandpa/grandma, so I had to pretty much leave that in, even though she's clearly NOT their granddaughter.

The old fellow in the headband is nicknamed "Popeye" not after the cartoon character, but after pop-eyed goldfish which he claims to be researching.

I actually like this one. It's cute, it's funny, and it has a good message for kids: be nice to old folks.

I actually have an interesting story to tell about that. I was in Osaka Castle once and saw an old man who was in front of me drop some things out of his bag. He didn't notice, so I picked up his things and told him in Japanese that he had dropped them, gave them back. He was impressed that I could speak Japanese and was so polite, so he invited me to come over to his assisted living retirement apartment complex to have lunch, meet some of his family, and play the boardgame go. There's a community of old people there who get together and socialize. Every time I visit Japan, I try to visit them if I can and play.

Hope you enjoy because next week is my least favorite episode.
Torrent Link: http://www.nyaa.se/?page=view&tid=758864

Posted by Sailor Otaku at 10:40 AM No comments:

"The 100 Year Old Siren that Summoned the Stars"

When four children go missing in a single night, Winspector discovers a bizarre connection: each child was born on the same night within just three kilometers of each other. The culprit appears to be the leader of a mysterious apocalyptic cult. Is she truly a witch? Has Winspector met their match against her powers? Only the wisdom of a mountain shaman may save Ryoma, the children, and the world itself from utter destruction! 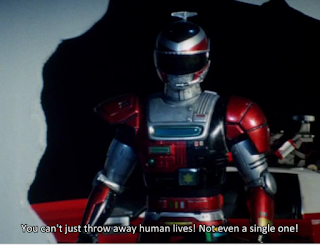 Notes:
This is a Sagiyama episode, and I'm sorry to say, it's silly as hell. It involves a witch, an apocalyptic secret cult, and straight up magic. Oh, sure, they managed to reign Sagiyama in and probably forced her to say magic is science later because she loooooves her evil sorceresses, but on the positive side, the writing is good, and Ryoma shoots hooded Klansman looking guys. He has to consult with a yamabushi (a mountain shaman) to learn how to defeat the witch, because qi is like an electromagnetic force or something.

Also, my major gripe is that they say he tried to save Karura but he didn't really do as much as he usually does to save people. In any case, expect some weird near Shaider level Satanic witchcraft crap in this episode and try not to think too much about this Secret Society of Q that Ryoma knows about and only appears once ever, and you might enjoy it. The silliest episode is yet to come.

Next week's is not too bad, and we get the return of Ryoma's sister Yuko!

A young girl's father is murdered, and she claims that a philanthropist business owner is the culprit. Interpol turns up a link between him and a drug cartel based out of Hong Kong. But without any evidence to support the accusation, Winspector can't touch him, and there will be no justice for the murdered father. It's up to Hisako to infiltrate the organization and get the proof... before the girl can take matters into her own hands and kills the philanthropist herself!

This is the first episode I think that we have a full on actual murder in the episode, but not the last. It's dark, and it gets darker as the murder victim's daughter seemingly plans to commit murder to settle the score. We end up with a very good episode with snappy writing and a great gimmick.

I'm not saying that 1994's "Speed" borrowed this plot straight from Winspector, but here's the interesting roundabout: Speed took its plot from a 1985 film called Runaway Train which was based on a screenplay written by Akira Kurosawa. This script was written by Takashi Yamada, who also contributed scripts for Zillion, Kamen Rider Black, DoReMi (of all things), and the incredibly catchy themed Agedama

I hope you enjoy this week's episode, because consider this fair warning: next week's episode is fucking goofy as hell. Witches in Winspector, honestly.

Episode #25
"The Robot that Cried in the Rain"

When Bikel is damaged during a high risk takedown, his optic sensors begin to call up images of a woman he met, almost as if he's hallucinating. With the damage putting his career as a police officer at risk, can Bikel pull it together and do what needs to be done? Will the damage work itself out on its own? Or is he destined for the scrap heap?

If you love Bikel, and who doesn't, I have good news for you about this week's episode: this is one of his finest focus episodes. If you've never cried for a robot before, you just might after this one.

The scene where Bikel's sitting outside in the rain has some wonderful cinematography and music. 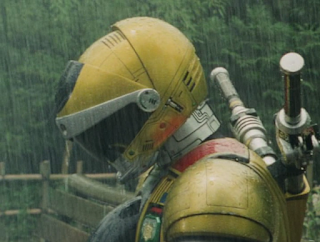 The writing for this episode is sharp, feels very police-y, and hits you right in the heart. And it should: the writer is Nobuo Ogizawa, who regularly writes clever plots for Japanese police procedural shows, including Detective Conan, but got his start in Metal Heroes. GoGoV also has some of his episodes, and he's quite good at making things feel like police/detective work.
The line that Commander Masaki gives at the end about why Bikel shorted out is just so, so good.

You will believe that a robot can cry. Enjoy.