Years ago, Commander Masaki arrested a Yakuza enforcer and set him on the path to redemption. Amazed at Masaki's kindness, he vowed to himself to change his life: he underwent a cryogenic experiment, intent on awakening in one hundred years. But after only nine years, his cryo tube fails, leaving him in 1999 while the repairs are made. As he visits his old family and friends, he becomes increasingly aware that the world has changed. But this man, a modern day Rip Van Winkle, may hold the key to solving one of Winspector's cases!

Notes:
Urashima Taro is a Japanese fairytale, somewhat similar to Rip Van Winkle in style, about a man trapped out of his time.
https://en.wikipedia.org/wiki/Urashima_Tar%C5%8D 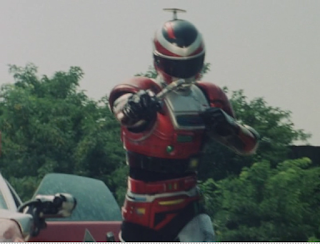 This is a strange episode, but it's a really well written one. I had to do some localization because Furusawa speaks a lot of Yakuza gangster slang, and it doesn't make a lot of sense taken literally. I hope it makes sense in English.

There's a scene where Ryoma Suits Up, narrowly avoiding being sprayed by the metal solvent... then immediately gets out and gets sprayed. Nice work, Fire!

If you like Bikel and Walter, next week is almost exclusively about them! Happy New Year!
Torrent Link: http://www.nyaa.se/?page=view&tid=770962
Posted by Sailor Otaku at 5:20 PM 1 comment:

Winspector's darkest day has come. With Ryoma still working on mastering the recoil of the Gigastreamer, Hirosaki, who previously used Brian to attempt to take his revenge for his daughter's death, sets his sights on his deadliest plot yet. Having taken control of the Winsquad and hacked into MADDOX, he seeks to exact his own twisted plot for justice. With Bikel and Walter disabled, the Winsquad stolen, and the Tokyo Metropolitan Police on lockdown, Ryoma is unable to Suit Up. It's the deadliest fight Winspector has ever encountered, and failure is not an option! 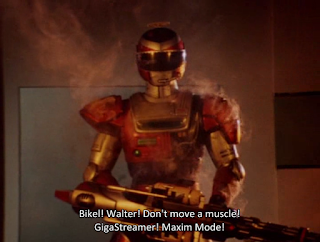 Notes:
This episode is amazing. Action from start to finish. Everyone is a super badass. Definitely one of the best episodes in the entire show, in my opinion. It even has a training episode. If you were to only watch one episode of Winspector, this (and the bird episode) would probably be one of the ones I recommended.

I'm going to be out of town for Christmas, so it'll be next week before I release. Hope you guys have a merry one. Don't forget, the Fire Figuarts releases next month!

Perhaps the most legendary of weird tokusatsu episodes, the "Satan Claus" episode of Space Sheriff Shaider, presented with accurate subtitles for your holiday viewing pleasure.

"Priest Poe of the Fuuma Empire has a wicked plan to destroy the dreams of the children of Earth: by ruining Christmas! When a black suited Santa who calls himself Satan Claus comes to take their presents rather than leave them, he lures the children into an anti-Santa cult! It's up to Shaider and Annie to rescue the children and save Christmas!"

Remember, crucifying Santa Claus upside down and breaking and entering into people's homes is the true meaning of Christmas!
Notes:

I used BunnyHat's 10-bit raws for this (thanks!). The audio quality can be pretty bad in some places, but video quality is good.

I can't remember what Over-Time uses for Shaider's transformation phrase, but SHOUKETSU means "sinter", which is a metallurgical process where metal is made solid by applying heat without melting the metal. It's frequently accomplished using... can you guess? Plasma. This probably is not the weirdest episode of Shaider, but it is certainly up there with them. The subtitles that are out there now are guess subs, almost completely wrong. Tom says it's because the subs were made from the Tagalog dub instead of the Japanese originals.

Whenever you think that you might be doing something strange, remember that in 1986, Toei shot a creepy forest cult scene where children sacrificed Santa Claus to Satan.

Bikel and Walter have a third brother: Brian, a peacekeeping robot commissioned by the FBI. But when Brian returns for yearly maintenance, Dr. Asahina, creator of the Winspector Support Droids discovers that he has been heavily upgraded with high performance weapons and near invulnerable armor. But in their attempts to create the ultimate law enforcement robot, the upgrades by the Americans also expose Brian's greatest flaw. Now it's a race against time to stop Brian... but nothing Winspector has can even scratch him. Only a new, untested prototype weapon stands a chance... but will it be ready in time? And can Ryoma even use such a dangerous device?

Notes:
This episode is an Upgrade Episode, and it is fantastically done. This episode, of course, came out after Robocop, so there's a bit of a reference, and a bit of social commentary on the American police style as opposed to the Japanese style.

Brian's helmet appears to be a combination of a Flashman and a Spielban helmet, repainted.

There's some allusion to Frankenstein in this episode, and Hirosaki's mental illness is actually very convincingly portrayed as a father who saw something terrible happen and just lost it. So many good cinematography choices and use of camera angles: watch the fights with Brian, it'll impress you for a film camera show.


Also... this is just the first part of a two-parter.

I also double-subtitled Brian's Engrish in the beginning. I have what he says, and then what the subtitles are trying to say. Enjoy, this episode rocks.

A toddler has gone missing, and kidnapping is suspected. But Hisako discovers an older girl with some similarity to the missing toddler. As Winspector investigates, the mystery begins to deepen, leading them to a terrifying discovery!

This episode features a guest appearance by actor Yutaka Hirose, perhaps best known for his role as the Demon Fist Master, Jin, from Dairanger!

Notes:
This is a pretty creepy episode. Much better than the previous one. There have been other sci-fi shows that do similar storylines, and Winspector does it very well. The writing in this episode is pretty good.

There's an interesting thing in this episode: Yutaka Hirose shouts, "You bitch!" while attempting to hit Hisako with a chair in one part. Rebroadcasts and the closed caption on this actually leaves out that line. In the eighties and nineties, Japanese shows had a lot more leeway with what they could have people say and do.

"Kono ama!" is a little strong, and one of the things you don't hear much on TV these days. I just wanted to mention it because it surprised even me to hear it. I wasn't inserting unnecessary swearing like certain other sub groups, what Yutaka Hirose says is the same thing that Jotaro Kujo calls his mom on Jojo, and as you certainly know that's pretty not nice thing to say to someone.

There is a line where the scientist suggests reversing the polarity of the electromagnetic flow. The line is so similar to lines used in Japanese Doctor Who that I treated the reference the same way. 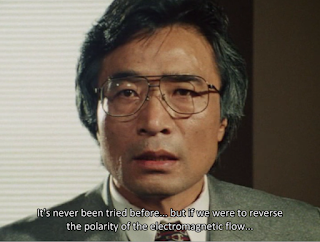 Hope you enjoy this entertaining sci-fi episode featuring one of tokusatsu's most legendary badasses.