With Ryoma overwhelmed during a fire rescue, and the team planning to disband and move to France, Ryoma becomes increasingly concerned about the unidentifiable health conditions he is experiencing. When Commander Masaki investigates, he discovers a shocking truth: an enemy from Winspector's past, bent on revenge! As Commander Masaki plans for Winspector's replacement, he is forced to make a critical decision, the darkest and most difficult of his career. The stakes have never been higher as Tokyo is plunged into chaos! The series finale of Winspector!

Notes:
Here it is, at long last, the final episode of Winspector. It's a great episode. Wraps everything up nicely and leads into Solbrain perfectly. I took a bit of a liberty with a localization, Ryoma's quote about "saving the soul and the brain", but I thought it worked well, and the meaning of what he says is really the same. It just is a nice lead-in.

Masaki's crisis of conscience is intense, one of my favorite moments of the series. To have to make that kind of decision is beyond intense.


They said it couldn't be done, that one person couldn't sub a show by themselves. Even though I subbed it myself, I would never have completed it without the help of others.

Special thanks and gratitude to:
And ALL OF YOU for supporting, watching, and interacting since last May. Thank you, thank you, you are all amazing. 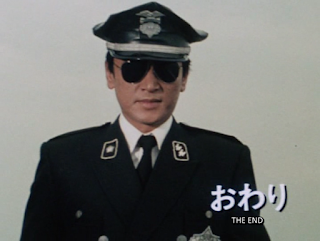 An unprecedented opportunity for Winspector to operate on a global scale arrives, as the team receives an offer from the ICPO in France. But something is happening to Ryoma. Bizarre headaches and hallucinations are causing him to doubt himself. To make matters worse, there's the questions of his sister, Yuko, being left all alone, and what Tokyo will do without Winspector. As each of the team members and those closest to them reflect upon their time with Winspector, Ryoma's greatest personal crisis yet awaits. Will Winspector really be dispatched overseas? Or is this The Fall of the Rescue Police?

Notes:
It's beginning. Are you ready? Manly tears this episode as everyone reflects on their experiences with Winspector, set to music. There are a few clip-show elements that highlight some of the greatest moments for each character. We also get to (at last) see where Ryoma lives -- a very small apartment for an officer of his status. We also learn Ryoma and Yuko's backstory, get a touching scene at the grave of their parents, and get a curtain call of all of the supporting characters to resolve plot lines that have been out there since episode 1. Inspector Rokkaku's scene was particularly heartbreaking, I thought. They were all fantastic.

Only one more episode left, my friends! Stay tuned!

Company trade secrets are being leaked and sold to rival corporations, and the only consistent link is that they seem to be coming from a fabulous computerized apartment complex where every need is seen to by an automatic computer system. What's behind the leak of the secrets? And when the computer system goes haywire, will Ryoma and the team be able to save the residents? Find out in The Millionaire Apartment Trap!

A Sagiyama episode about a little girl that has no psychic powers, and a rabbit. The bizarre scene where her father almost throws the rabbit to its death, and where her father tells her he wants to protect the rabbit later, it's actually not a bad episode. 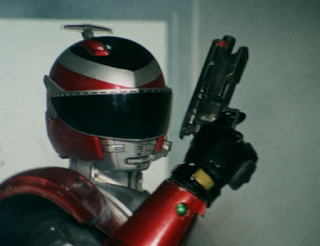 There is a disappointing use of stock footage at the end of the episode from Episode 10, as the exact same footage of the ultrasonic wave generator appears. We also never see Ryoma take down the syndicate leader. We're just to assume that they do it. Well, why not show it, I say! It would be more exciting than escaping Pee Wee's Playhouse with moving chairs, lasers, and bunnies. Anyway, an overall OK episode hampered by somewhat lazy writing and stock footage.


Enjoy. The finale begins in the upcoming two parter!


One of the neighborhood kids is a local menace. Ryota reveals that he may be in a gang run by his grandfather. When Ryoma's team investigates, they discover that the boy is a product of his grandfather's twisted teachings. But there may be more to this gang than meets the eye. What will Winspector do when the destructive power of the GigaStreamer is stolen? And will the fate of the Evil Deed a Day Boy end in tragedy?

Notes:
One of the typical "goofy episode that turns into serious tragedy". It's a good enough episode, I suppose, and it has the GigaStreamer being stolen. The actual story behind the gang is quite good, though I think grandpa certainly could have made Hikoichi's upbringing a bit more proactive, especially given his inspiration for it. In any case, the episode has some enjoyable writing and some great scenes with the bots. Also, Ryota is back, for once. He hasn't been in this show since that terrible Scooby Doo episode with the mountain witch and bat monster.

There is one more episode before we hit the two part finale! May this image of Bikel facepalming serve you well in internet discussions.

It's a Romeo and Juliet love story, as two star crossed lovers, one who went to juvenile prison, and one who stayed in school, get a chance at the life of a man who victimized them. Only Winspector stands between them and an explosive conclusion, and every second counts! Will this love story have a tragic ending? Will there be time for Romance Before the Countdown Hits Zero? Junichiro Katagiri, also famous as Yellow Turbo, guest stars in this episode! 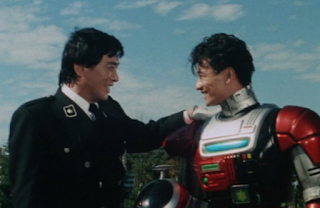 Notes: Ryoma pulls a CrossTector ability out of his ass in this episode, one that's only been shown once before and hasn't really been established as an "actual" power. That being said, this is one of the best written episodes of the series. The main plotline is very compelling, and Ryoma gets one of those rare scenes with Ryoko where you actually see the compassion and humanity in him. Rather than just being an invincible superman, he's a good judge of character, too. There's also one of the funniest scenes of the series, Bikel trying to disguise himself.

Two in one week, because I love you. 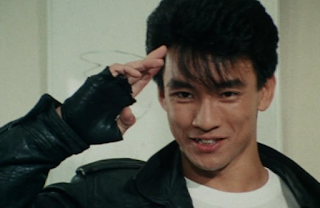 A crime spree committed by a little old lady is interrupted by an even bigger crime spree, one that threatens to hold Tokyo for ransom under the threat of bombing. With Winspector racing against time to prevent the crimes, an odd alliance is formed between a failed actor who witnessed the crime. Will they be able to stop them before time runs out? Find out, as this failed actor gives A One Day Only Performance!


Notes:
This episode is wacky, a rare attempt at outright comedy in Winspector, and I think it works well. Bikel with his Nagoya accent is played against Yonekichi's Kyushu accent, and the result is actually quite comical.
This is also a "famous guest star" episode. Yoneyama Yonekichi is played by the late comedian from Kyushu, Batten Arakawa (Batten is an x-mark, like a mistake, and is a colloquialism used like the English expression 'my bad'; another example is Batten Robomaru).


Arakawa's most famous comedy role was ”Grandma Oyone", who is basically the exact same character portrayed in this episode. It's also the reason for the repetition of the "yone" character in "Yonekichi Yoneyama". 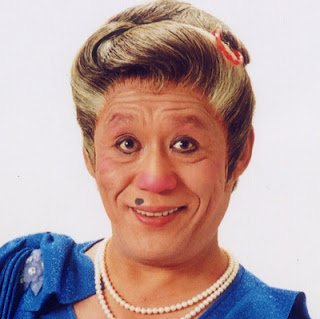 One interesting fact about Arakawa was the on CDs and records, Arakawa was shown dressed in man's clothes, so many people who didn't know thought that Grandma Oyone was an actual old lady and had no idea Arakawa was cross-dressing.

Only 5 left. Next week features Yellow Turbo's actor as a criminal! 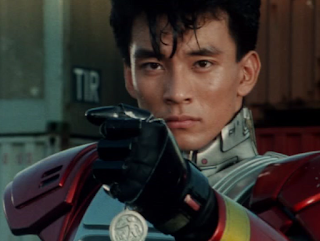 Warning to sensitive viewers: the subject matter in this episode is VERY DARK.

A young boy with a sophisticated bomb takes Winspector HQ hostage. The demand? Prove his ex-con father's innocence in a recent crime that's provoked a nationwide manhunt. The only problem is that his father is missing, and the boy's demanding results by 3 pm sharp. The only question is... with serious evidence linking him to the crime, is the boy's father actually innocent? Get ready for the tensest and darkest episode of Winspector yet as the team confronts the Boy Who Became a Bomb. 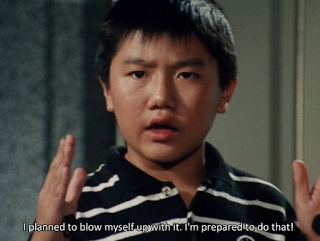 Notes:
I have occasionally said that Winspector has a few episodes that would not pass the Japanese equivalent of Network Standards & Practices these days. This is one of them. This episode was prior to the AUM Shinrikyo terrorist attack on the Shinjuku subway, and prior to 9/11. A boy who builds a bomb to manipulate Winspector, and the story doesn't exactly have the most cheerful of endings. A very good episode with very good writing by the master of putting children into terrifying situations, Junichi Miyashita who also wrote the episodes about children being bitten by a snake, falling from a building and needing an operation, being abducted by gangsters, and being a witness to a crime and having the criminal come around to murder you. Certainly not on a children's morning timeslot. It's one thing to have scary monsters threatening to destroy the world, and it's another to have real world violence.

Enjoy this very intense, very realistic, and very dark episode, a relic of a different time in Japanese television. Next episode goes the complete opposite direction and is full on wacky.

Posted by Sailor Otaku at 8:57 AM No comments:

It's a potential crisis in the making, as a terrorist organization has successfully smuggled both blueprints and material to make a nuclear bomb into Tokyo. The culprit? A former colleague of Masaki from the Tokyo Metropolitan Police who appears to have gone rogue. Winspector rushes to investigate, but there appears to be a rift in the terrorist organization. Get ready for a tense and high-energy case with everything at stake as Winspector desperately struggles to find and stop The Turncoat Investigator! 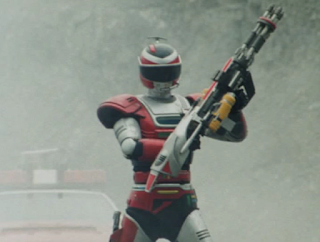 Notes:
This episode is awesome. The action is tense, the writing is slick, and the plot just nails it on every point. Also, there's a foreigner in the episode.

This is one of those episodes where it seems like this episode was written as a crime drama and then they realized, "Oh, we've gotta throw in some super cars and cybersuits for the kiddies." -- because this would have worked as a pure crime story.

Hope you enjoy this amazing episode. We have 7 episodes left! Are you sad?! Well, don't be, it won't be the last we see of Ryoma, Masaki, Bikel, or Walter.