An amazing yet unfinished virtual reality game, capable of transmitting sights and sounds directly into the brain of the player is stolen by a programmer with a grudge against his own company. But the program has a flaw that the programmer aims to solve: prolonged usage can be fatal. Trapped within the virtual reality world, Solbrain must find and rescue the children from a nightmarish dungeon before it's too late to save them!

Notes:
I'm not going to claim that Solbrain came up with the idea of "people trapped in a VR game that face in real life death or brain death" like popular anime such as .hack, No Game No Life, and Sword Art Online. I say this because Westworld existed long before that, though Westworld was more of an amusement park than a VR simulation like this story is. Is it possible that all of these borrowed the story from Solbrain, or at least were inspired by it? I would say it's possible. This is the earliest "trapped in VR" story that I've run into. If you know of any others, please do let me know. Someone said "Ender's Game" but that's really quite different than this and the others I mentioned.

For an early episode, this is a very solid one. It has kids without being annoying. It uses costumes from other Toei properties without them being out of place. And everything in the story feels believable. In a time when VR is both a real technology and a popular story element, this story is definitely entertaining. I do have one interesting note to make that you won't hear ANYWHERE ELSE: the original working title for this episode was "I Am a Game Hero". I know this because I own one of the original scripts used in production for this show, and it's crossed out and "The Amazing Computer Game" (Yume no Game Soft) is written in next to it. 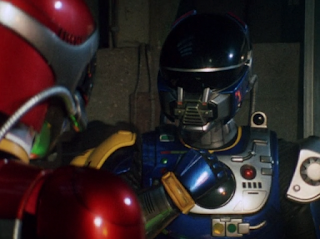 Enjoy this great episode. Next one is weird, but entertaining.

Curious about human behavior, the newly built SolDozer wanders off, only to end up being brought in to a local police station. Shortly afterwards, a tragic car accident claims the life of a local professor. But a rash of kidnappings lead the Solbrain team to a chilling conclusion: somehow, the dead professor has returned from the grave. Now, it's a race against time for Solbrain to put an end to a truly nightmarish scientific experiment. 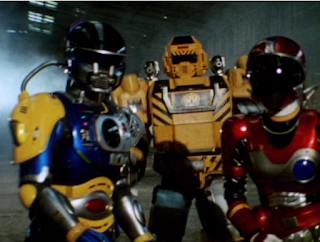 Notes: Some good old fashioned nightmare fuel to mentally scar children for life, this episode reminds me quite a bit of classic John Carpenter horror films such as The Thing and Prince of Darkness. A good episode, not an amazing one, but a really entertaining one that hits the right notes and through use of good color filters and camera angles, succeeds in doing exactly what it sets out to do. 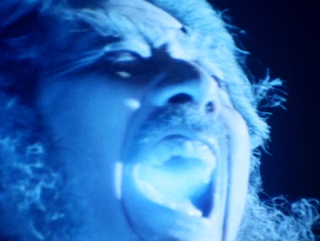 This episode also further's SolDozer's human development, and builds on Jun's character development by revealing that he wasn't always just a hothead rookie, he was once a hothead rookie screwup. This is one of the things that I think Solbrain has that Winspector didn't have: the characters seem to have personality outside of their police work and occasionally cut up and reveal their human sides.

Two sisters with apparent psychic powers, capable of deadly telekinetic bursts, begin an all out assault on the city. Their objective? To take revenge for their prison-bound father by destroying Solbrain. Masaki and Daiki head to the prison to try to convince their father to give up their location. Solbrain's mission is to save the lives and hearts of criminals... but what happens when someone doesn't want to be saved? As the destruction piles up, Solbrain is forced to call for backup. The newest support droid, SolDozer, hits the scene in the explosive conclusion!

Notes:
This is a fun episode, though the real storyline isn't with the early 90s goth chick sisters themselves, it's with their father. We're still in the "introduce the team and all their abilities" stage, so in this you get introduced to the fact that Jun is a rookie hothead and Kame is a goofball. You'll also see your first scenes of SolDozer in action. I should mention, you might be asking yourself, "Will we be seeing that Solid States launch sequence in every episode to eat up time?" and the answer is, "Yes, until they sell enough toys, and then they pretty much forget about it." 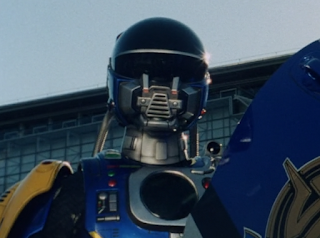 One year after Winspector leaves Japan to work with the International Criminal Police Organization in Paris, Commander Shunsuke Masaki has created a new Super Hi-Tech Rescue Command, codenamed Solbrain, as a replacement.

Learning from the mistakes of the past, Solbrain's new suits are slightly less powerful than Winspector's, but have a longer equip time. Additionally, Solbrain is no longer housed within the Tokyo Metropolitan Police building, and a new high tech arsenal of equipment has been designed to support the crew.

Rookie detective Daiki Nishio, internationally trained by the FBI and selected from candidates all over Japan, leads the team against threats that are too dangerous for normal police officers to handle. Utmost is Solbrain's mission: to prevent crime by saving the hearts and souls of criminals.

On Daiki's first case, an unidentified flying object appears over Tokyo and begins to rain destruction on the city. Solbrain springs into action to identify this mysterious craft and save the city before there's nothing left to save!

Solbrain has some amazingly written episodes. I really think you're going to enjoy this show. Some of the storylines just blew me away.

Q & A:
Q. What's a BothWinder?
A. It's a magnet beam grappling hook. As for the name, it's what they named the toy. 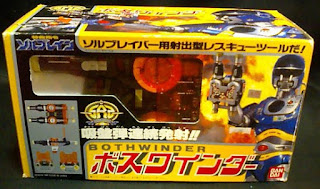 Q. What kind of car is the SolGallop?
A. It's a Toyota Sera. The Sera actually had the ”suicide doors" in real life. One thing that is not clear early on in the series is that the SolGallop actually changes form like the WinSquad/FireSquad. It's not quite as obvious because it doesn't change color, but when Daiki uses Plus Up, there's a bubble shaped dome shield that covers the car. 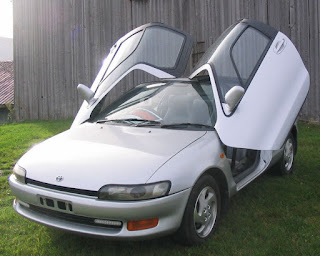 Q. Who's that yellow robot in the opening/ending?
A. SolDozer. You'll see him next episode.