The prototype suit used to design the SolBraver Solid Suit is hijacked and stolen by an unknown assailant. Shortly after, acts of mayhem, including an attempt on Commander Masaki's life occur. Who stole the Solid Suit? And what is their ultimate objective? You won't believe the conclusion of this outstanding episode of Super Rescue Solbrain!

Notes: This is an outstanding early episode. It really hits the right places emotionally. We see why Solbrain does what they do, we get a real feeling for the types of people they are, and we see a side of Commander Masaki that rarely comes out. This is a Takashi Yamada episode, who wrote some of the finest episodes of Winspector, as well as two of my 90s favorites, Genji Tsuushin Agedama and Yume no Crayon Oukoku (also Robotack, though some consider that to be not a distinction). The less I say about the plot, the more amazing it'll be when you see it played out on screen.

Sasamoto in this episode is portrayed by none other than Junichi Haruta, who many fans will recognize as Super Sentai series heroes Goggle Black and DynaBlack, and many Brazilian fans will certainly recognize him as Mad Gallant from the very popular series, Juspion. He's also made an appearance recently in Kyoryuger as KyoryuGreen, Souji's swordsman father.

Solbrain fails in a mission to find a bomb. Somehow, the criminals responsible are using technology that defies the bomb detectors. At the same time, with a bolt of lightning, a boy's deceased inventor grandpa returns to life! As this miraculously returned man rushes to find the parts to complete his invention, they (and Solbrain) discover that this returnee from the afterlife has the ability to sense the presence of the hidden bombs!

Oh boy, here we go. Time to get this out again.

Kyoko Sagiyama, the queen of tearjerkers and melodrama, from Minky Momo and Winspector fame, returns with her first episode that was originally titled "Ghost Grandpa". I have the script for this one, and Ghost Grandpa is crossed out and "The Human Regeneration Machine" is written in. I guess someone told Sagiyama that ghosts don't belong in Rescue Police after she decided to sneak it by. In any case, this episode is pretty typical of Sagiyama episode, in that it is about events that don't really directly involve the Solbrain squad that still gets them involved. That being said it's nice to see that Solbrain isn't perfect. Mistakes do get made. Look at how quietly angry Commander Masaki is after Solbrain fails to find the bomb.

I'll leave it to your own discretion to determine whether you like this episode or not, but I personally find it a little ridiculous. The tearjerker ending (spoilers) is good, and the message of the episode is good, but like with many Sagiyama episodes it really feels like she wants to tell her own story and then include the characters from the main series in her story as a second thought.

Her next episode, episode 18, was slightly better, but her episodes always feel like filler, and a departure from the main story.

One of Reiko's former high school classmates, a traditional "rakugo" storytelling comedian, falls victim to a sudden kidnapping. Who would kidnap a second rate comedian for ransom? When the comedian's mother refuses to pay his ransom, he is suddenly released by his kidnappers... and he finds himself sympathizing with them! Will this case of Stockholm Syndrome lead to disaster for the comedian and his mother? And what is it that the criminals are truly after?

Notes:
The kind of comedy performed in this episode is called "rakugo". It's a kind of comic storytelling where one comedian sits on stage and tells a story. He is the only person on stage, and he portrays different characters through different tones of voice and turning of his head and body to signify different characters talking to one another. If you'd like a Western example of this, consider British comedian Eddie Izzard, who turns his body and head and changes his tone of voice to portray different characters, such as Darth Vader talking to the person who thinks his name is Jeff Vader on the Death Star.

The comedy routine delivered in this episode is a very famous and well known routine called "Jugemu" involving a character with a ridiculously long name. As trying to translate the individual parts of the name would ruin the joke, it's left intact. Much of the story is overlaid with the characters talking over it, so you don't really get the whole experience. More information can be found here:
https://en.wikipedia.org/wiki/Jugemu


If you're curious, yes, the well known Western children's story "Tikki Tikki Tembo" is in part based on Jugemu.

The actor who portrays Shinichiro Ishimaru is actually a famous rakugo comedian in real life and still performs today. His real name is Sanyutei Kintoki. The joke is that he's actually a very good and famous, and he's playing a crappy comedian in this show.

I love this episode. I think it's a feel good episode that shows that sometimes people consider motivations over actions. It almost feels like it wasn't even necessary to have an action sequence, and the writing was top notch.

"The Courage that the Monster Gave Me"

A strange homeless man who calls himself James Bond is being pursued by mysterious agents. At the same time, rumors of a wolf or even a wolfman are turning up all over Tokyo. Could this Mr. Bond and the wolfman be connected? Solbrain tackles its most bizarre case yet! 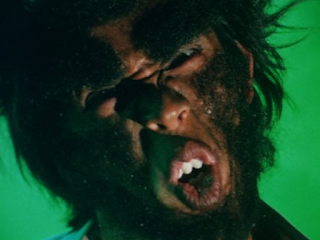 Notes:
Sorry about the delay this week. Was out of town.

A solid investigation episode with unfortunately silly special effects, but a good story overall. Jun continues to be one of the most fun characters. The villainess in this episode is played by none other than Mayumi Yoshida, aka Lou, Pink Flash from Supernova Flashman!

Given the wolfman theme, it's interesting and certainly no coincidence that the family name of the proprietor of the company that creates wolfmen is Kujo, a nod to Stephen King's Cujo, about a rabid killer dog.