A member of a deadly organized crime syndicate is arrested, but refuses to give up his other gang members. As victims of the gang continue to increase, Daiki goes undercover and pretends to be a criminal to try to get the truth straight from the arrested man himself. But when the fake escape they planned goes awry, Daiki is cut off from Solbrain HQ, and with the criminal and his syndicate becoming increasingly suspicious, each step could be his last!

Notes:
This is a pretty cool episode. Junichi Miyashita writes a classic cop show trope, an undercover cop bound in handcuffs to a criminal -- they did it on a classic A-Team episode, they did it on O Brother Where Art Thou, and you might remember when Kamen Rider Accel ended up cuffed to a criminal, except that was a hot woman and he was a married man!

This is one of those episode that's really a cop show first and a hero show second. Some great stuntwork this time. And I hope you enjoy it, because Kyoko Sagiyama is next week, though she actually manages an episode without a magical psychic girl or talking stuffed animal! 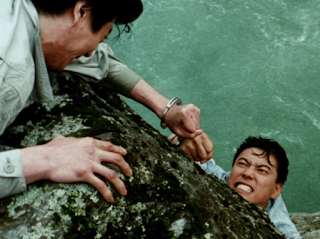 During a tour day at Solbrain HQ, the SS-1 suddenly makes an unauthorized takeoff before vanishing into thin air with Daiki and a group of children on board. When the children soon turn up, they tell a bizarre tale of having witnessed a giant picking up the SS-1 amid a massive garden. Somehow, someone has developed a shrink ray, and has stolen the SS-1... but for what purpose? 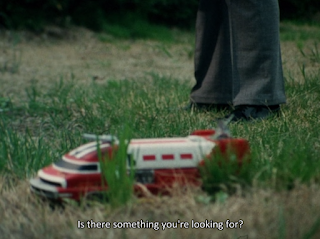 Notes:
Honey, I Shrunk the SS-1!
Noboru Sugimura wrote this strange episode with a strange motivation for the crime. While it's interesting and the scale models look pretty entertaining being used alongside normal scale objects, I don't totally understand why he needed the SS-1 and couldn't just use something else. I'm guessing it has to do with the fact that the SS-1 is fast and well armored and can fly if necessary.

It's worth noting that 1:33 scale is the standard scale for most scale airplane models. A well selected size.

Posted by Sailor Otaku at 1:54 PM No comments:

Reiko meets an old man with a strange old doll that he talks to and takes care of like it's his own child. When street punks in his neighborhood take it away, Solbrain acts quickly to recover it, learning its surprising origins. But the unrepentant criminals are not so easily discouraged, and the next time they come for the doll, it could be the end. Find out the surprising history of the doll and learn an interesting and little known fact about history in this episode of Solbrain. 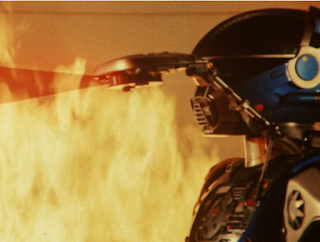 Make sure you watch the episode before you read my notes, as they will spoil the episode. If you don't care about that, read on.

First of all, the story that Mr. Shinozaki tells is completely true: the friendship dolls really were exchanged by Japanese and American children prior to World War II.  When the war happened American things were rounded up and purged. The dolls were unfortunate victims, and many of them really were used for target practice, stabbed with spears, burned, or cut with swords. Some people had the foresight to know that wars do end and times do change, and some dolls managed to be hidden away. Out of 12,000 dolls sent to Japan, a mere 331 survive today, and they are on display in various places. In the United States, many Japanese dolls have been discovered, recovered, and placed on display, but many more are still lost.

If you happen to have a grandparent or great grandparent with a strange doll from Japan in or around one of the cities from the article, you might want to look into whether or not it's one of the missing dolls, because they're an interesting relic of history.

A Japanese documentary on the dolls.

It's also worth noting that the song that Reiko sings at the end is a real song. It was written by Ujo Noguchi, who composed numerous Japanese children's songs.

The episode itself is OK, but the historical aspect of it is quite interesting. Susumu Takaku, usually known for creepy things, writes this one.

Posted by Sailor Otaku at 10:13 PM No comments:

Solbrain protects the people of Tokyo from high risk crimes and incidents, but what about the ordinary police officers who contribute to their communities? When one such ordinary officer, Sergeant Kageyama, refuses to fire his weapon at a suspect when his life is endangered, Solbrain discovers a surprising reason behind it. 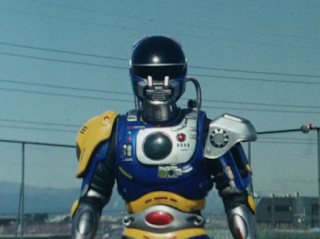 Notes:
Veteran filler writer Takashi Yamada, writer for everything from Blue Noah to Robocon, to two of my all time favorites, Agedama and the Wondrous Crayon Kingdom, presents this very well written story of normal Japanese cops caught up in serious situations. In this story, I would say that Solbrain are actually passive observers. In this time of rampant police criticism, Japan still prides itself on small community precincts rather than large police stations, and even to this day it's not uncommon for communities to know their officers personally. It is something that used to exist elsewhere, but has become a relic of a simpler time. A very well written and emotional episode. Enjoy.